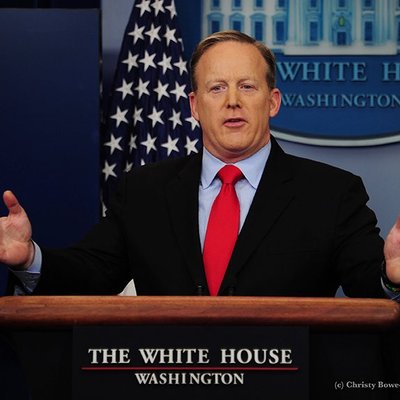 But even before he made his mark as one of the most recognized members of Donald Trump’s team, Spicer built a decades-long career in Republican politics, witnessing and shaping the inner workings of Washington, DC, from every vantage point—as a House of Representatives communicator, Assistant U.S. Trade Representative, Republican National Committee chief strategist, top adviser to presidential campaigns, and, of course, White House spokesman.

After graduating from college in 1993, Spicer worked on a number of political campaigns. In the late 1990s, he worked for representatives Mike Pappas (R-NJ), Frank LoBiondo (R-NJ),Mark Foley (R-FL), and Clay Shaw (R-FL).

In 1999, Spicer joined the United States Navy Reserve as a public affairs officer; he currently holds the rank of commander. As of December 2016, he was assigned to the Joint Chiefs of Staff’s naval reserve contingent in Washington, D.C.

From 2000 to 2001, Spicer was the communications director on the House Government Reform Committee, and from 2001 to 2002 he was director of incumbent retention at the National Republican Congressional Committee (NRCC).

From 2003 to 2005, Spicer was the communications director and spokesman for the House Budget Committee. Afterwards, he was the communications director for the Republican Conference of the U.S. House of Representatives, and then, from 2006 to 2009, the assistant for media and public affairs at the Office of the United States Trade Representative in President George W. Bush’s administration.