A Slobbering Love Affair: The True (and Pathetic) Story of the Torrid Romance Between Barack Obama and the Mainstream Media 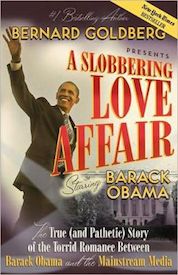 “Never in my memory,” says veteran journalist Bernard Goldberg, “were so many journalists so intent on effecting change as they were during the campaign of 2008.” Sure, mainstream journalists always root for the Democrat — Richard Nixon complained of media bias as long ago as his presidential campaign against John F. Kennedy in 1960. But in 2008 it went beyond that. In “A Slobbering Love Affair: The True (and Pathetic) Story of the Torrid Romance Between Barack Obama and the Mainstream Media,” Goldberg shows that this time journalists were not satisfied merely being partisan witnesses to history.

Goldberg demonstrates that this time these supposedly objective “journalists” were real players, helping determine the outcome. He details how, in 2008, the liberal media elite was on a mission — a noble, historic mission, as far as they were concerned. Never before in history had so many supposedly objective reporters acted so blatantly as full-fledged advocates for one side — and without even a hint of embarrassment. “A Slobbering Love Affair” tells the whole shocking story of the corruption of the media, from Chris Matthews and his appalling “I felt this thrill going up my leg” comment after hearing an Obama speech, to Keith Olbermann of MSNBC — which, says Goldberg, “didn’t even try to pretend it wasn’t part of the Obama campaign.”

Goldberg chronicles the relentless use of the race card in the 2008 campaign — not by Republicans against Obama, but by Democrats against McCain. He reveals the full extent of the media’s relentless campaign to destroy Sarah Palin (and Joe the Plumber), and its general indifference to stories about Obama’s ties to unsavory characters such as Jeremiah Wright, Tony Rezko, and Bill Ayers. He details Democrat plans to bring back the Fairness Doctrine — thereby effectively stifling conservative voices like Rush Limbaugh and leaving the mad partisanship of Matthews and Olbermann unchallenged on the airwaves. Ultimately, he demonstrates that it was the Leftist media, not Barack Obama, that defeated John McCain — and he explains why the corruption of the media bodes so ill for America’s future. Goldberg tears the cover off a corrupt media elite: How helping to elect our first African-American president would make liberal journalists feel better about the most important people in their lives — themselves

“The press,” Goldberg reminds us, “has constitutional protections for one main reason: to keep watch over a powerful government.” If the press is compromised, a corrupt government that it favors will be able to get away with murder. That’s the danger we all face when the mainstream media forgets its job and goes on a noble mission to make history — as it did when it went into the tank for Obama. That’s why “A Slobbering Love Affair” is a cautionary tale — and a manual for action for conservatives who are determined not to let this brazen corruption continue.