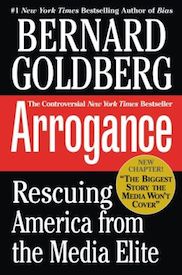 Former CBS News journalist Bernard Goldberg’s controversial book Bias removed any lingering doubt that the mainstream media is deeply, irredeemably tilted toward the Left. Now he follows up that bestseller with an even more scorching expos? of the real aims and views of the media’s most powerful figures. “Arrogance: Rescuing America from the Media Elite” goes far beyond simply identifying bias. In it, Goldberg once again fearlessly names names and explains why media titans not only remain in denial about the prevalence of liberal bias in news reporting, but are now advancing the fanciful claim that the media is actually biased toward conservatives!

Goldberg skillfully explodes that idea, detailing just how hollow and ridiculous it is despite its loud repetition these days in several bestselling books. He also shows why, given the way media types do business, the slanting of the news is all but inevitable. Finally, he outlines a series of solid proposals for breaking the liberal hammerlock on our news outlets and protecting our democratic processes from the corrosive effects of this all-pervasive bias.

Arrogance is an unforgettable glimpse inside the oaken boardrooms of the media elite. Goldberg gives you a ringside seat for revealing discussions of media bias he had with the likes of Andy Rooney and Tim Russert. He bravely exposes how the all-powerful bosses of the New York Times and other media leaders crack the whip and make any potential dissenters from full-bore liberalism toe the line. But the picture Goldberg paints isn’t entirely hopeless. He even includes a resource guide for recovering biased liberals, directing them to a wealth of conservative activists and organizations whose work on a variety of issues can help tilt America’s public debate back toward the center – if the media can be persuaded to pay attention to them. Arrogance is a significant step toward shaming our arrogant, self-serving liberal media elite into doing just that.

A few of Bernard Goldberg’s astounding revelations in Arrogance: