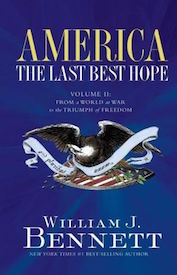 In “America: The Last Best Hope, Volume II,” renowned historian and educator William J. Bennett continues his acclaimed history of the United States — and confronts head-on the America-hating historians whose works liberals have imported into our schools and universities by the truckload. Covering the period from World War I to the Reagan Era, this new book is a lively and unapologetically patriotic account of the tumultuous decades that saw America become a world power, face down Nazi and Communist tyranny, and stand today against the global Islamic jihad as the world’s last, best hope to defend freedom.

In this large and sweeping volume Bennett, Ronald Reagan’s Secretary of Education and compiler of The Book of Virtues, draws upon a breathtaking array of sources in order to bring you inside the momentous history of the twentieth and early twenty-first century. He recounts numerous insider details that cast familiar historical events in a new light, from former President Theodore Roosevelt’s World War I meeting with President Woodrow Wilson in which he pleaded to be given the authority to lead a regiment in France to Ronald Reagan’s confiding to his son Michael what he regretted most about losing the 1976 Republican Presidential nomination to Gerald Ford – and many more.

From World War I through the Prohibition era, the Great Depression and the New Deal, to World War II, Korea, Vietnam, and the Cold War, Bennett retains an eye for the telling detail and the larger significance of particular events. Scores of larger-than-life figures stride memorably through Bennett’s account – from Theodore Roosevelt and Wilson to Marcus Garvey, Henry Ford, Huey Long, Winston Churchill, Douglas MacArthur, Nikita Khrushchev, Martin Luther King, and many, many others.

Unlike the Leftist historians who speak and write as if American history was little more than a litany of injustice, racism, imperialism, and oppression, Bennett writes this book with careful attention to historical accuracy, a keen and insightful conservative perspective, and, above all, with forthright and unashamed patriotism. As people around the world today look to America as their best earthly hope, here is a welcome and comprehensive antidote to the Hate-America-First indoctrination that passes for education in all too many of our schools.