The Fight of Our Lives: Knowing the Enemy, Speaking the Truth, and Choosing to Win the War Against Radical Islam 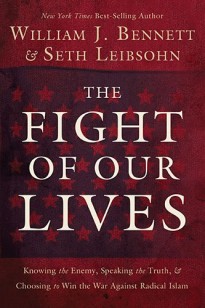 Ten years ago, when radical Islamist terrorists used three U.S. airplanes to kill nearly three thousand of our countrymen, America was angry. It was a focused and justified anger―one that generated clear objectives and a willingness to meet them. But that resolve has deteriorated so much that many of our nation’s top political and military leaders will scarcely utter the word that brought us here, “terrorism,” let alone the ideology that fuels it, “radical Islam.”

In The Fight of Our Lives, William J. Bennett and Seth Leibsohn examine the devolution of America’s post-9/11 tenacity and how this country’s well-meaning culture of religious tolerance, coupled with soft and apologetic political leadership, has placed us squarely in the pocket of radical Islamists who have made clear their intention to obliterate everything we value.

America’s devotion to political correctness has crippled its ability to accurately interpret and respond to the motives of its fiercest enemies. Unless we change course and re-engage the fight, the costs of our tolerance will prove tragic and immeasurable.

The Fight of Our Lives helps readers refocus, to reframe and understand the threats we face.

By surveying and explaining the current scene, Bennett and Leibsohn point the way to a future in which our enemies are properly acknowledged and firmly opposed.