Going to Pot: Why the Rush to Legalize Marijuana Is Harming America 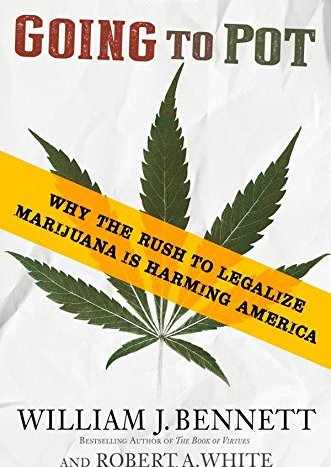 A 37-year-old mom in Madison, Wisconsin takes her two-year-old and four-year-old for a stroll. Kids and adult alike crack up as mom gives all sorts of funky names to the neighborhood squirrels, such as “Squirrely Squirrelerson” and his cousin “Squirrelster McSquirrelstein.” Mom’s on a roll. She is also stoned. It’s her afternoon “chill out,” as she enters the “kid zone,” with a little magic reefer to pave the way with the squirrels to the nuthouse. “Cute story, right?” says mom.

Not laughing are Nancy and her husband, residents of Nevada, both in their late ‘60s. They decided to attend a Steely Dan concert for some old-time reminiscing. Their 36-year-old neighbor hands them some marijuana for the wistful return down memory lane. They haven’t smoked the stuff in decades. But hey, why not? They take two puffs each in the parking garage before heading for the concert. “A few minutes later we attempted to step out of our SUV and almost fell,” recalls Nancy. They can barely function, stunned by the unexpected potency of today’s marijuana. The effect lasts six hours. “There is no way we could have or would have driven,” says Nancy. “This is not a couple of beers. This not a couple of martinis. This is being drugged.”

Just ask the New York Times’ Maureen Dowd. The liberal columnist paid a visit to Pot Central—Colorado. She stopped in a Denver-area “pot shop,” purchased a marijuana-laced “candy bar,” nibbled off the end and then (after having felt nothing) munched a little more. In mere moments, the New York Times brainchild “felt a scary shudder go through my body and brain.” She barely made it to her bed, where she laid curled up “in a hallucinatory state for the next eight hours,” thirsty, panting, paranoid, “convinced that I had died and no one was telling me.”

These are just some of the anecdotes shared by Bill Bennett and Robert White in a badly needed book that confronts the modern reefer madness plaguing America. And for every anecdote, there are far more stats and figures and scientific and medical studies to back the authors’ claims. Among them:

Those are a few facts articulated in this book. That liberals who fanatically insisted on suing big tobacco and banning cigarettes now insist on legalizing weed would be hilarious if not so sad. And yet, liberals and Americans generally (including those who for decades have tried to stop drunk driving) have been on a mad dash in the last 10 years to legalize this trash.

Bennett and White note that while there may be some reasons for legalizing some forms of marijuana—though even many of these are specious—advocates have come to their conclusions through a lack of information and serious misunderstandings. Some misunderstandings are based on falsehoods promulgated by interest groups. Others result from arguments that contravene common sense, “but are seized upon by those who would rather get high than critically think about the negative results of their position or desires.” And still others, state the authors, “simply do not know history very well, or are misinformed about the potency of today’s marijuana.”

The history and facts in this book are undeniable. I’m tempted to say that anyone who can’t comprehend them after reading this eminently readable 220-page book is, well, high … but I’m afraid it isn’t that simple.

Unfortunately, there are other forms of mental-psychological or even ideological blockage preventing the marijuana brigades from accepting this material. I’ve seen it often. I argue with these people at conferences, especially conferences with college-aged students. I was confronted by two students, both vocal and bold—and holding a microphone—at a college seminar in Washington, DC last summer. The seminar was hosted by a conservative organization, with the two young men both being libertarians. They insisted that all drugs should be legalized for recreational purposes. Yes, all drugs—marijuana, cocaine, heroin, LSD, you name it.

I also met a crop of marijuana legalizers at the last CPAC, the annual gathering of conservatives. Unfortunately for these folks, this CPAC was held just outside the District of Columbia, where marijuana had just been legalized, meaning they couldn’t smoke up before attending some of the speakers and panels. Indeed, one attendee regretted that the conference was held at the Gaylord Hotel at National Harbor in Maryland, which meant he couldn’t light up.

I’ve found that many of these youthful advocates for legalization are intractable. They cannot be convinced that legalized pot is different from beer or wine.

As I write this review, I shudder at the nasty “reviews” of this book posted at Amazon, which are obviously posted by people who have not read the book (this is common at Amazon). Many of these marijuana champions are simply unreachable and unswayable. For them, “freedom” in America has come to mean whatever one wants. This was not, of course, the American Founders’ understanding of freedom; that understanding has gone up in smoke.

But as for Bill Bennett and Robert White, they are at least attempting to navigate a confused culture through the clouds. They will be ridiculed for trying. So be it. This modern infatuation with marijuana has got to stop before the nation and culture truly go to pot.

Dr. Paul Kengor is professor of political science at Grove City College. His forthcoming book is Takedown: From Communists to Progressives, How the Left Has Sabotaged Family and Marriage. His other recent books include 11 Principles of a Reagan Conservative; The Communist: Frank Marshall Davis, The Untold Story of Barack Obama’s Mentor; and Dupes: How America’s Adversaries Have Manipulated Progressives for a Century.