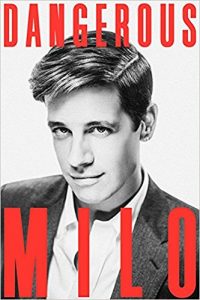 “An idea that is not dangerous is unworthy of being called an idea at all.” – Oscar Wilde

Championing dangerous and counter-culture ideas is the main topic of Milo’s return to the public forum with his self-published book, Dangerous. After considerable public backlash of comments that surfaced on a January 2016 podcast, Milo has reentered the political scrum as unabashedly and brazenly as he left.

In Dangerous, Milo has sought to create something bigger than himself by writing about himself and his experience reasoning and battling the forces he feels are stacked up against him. The book is structured as a chapter by chapter head-to-head between Milo and one of these groups and why they disapprove of the arguments that he makes. There is nearly no person in America he hopes not to offend, push, or challenge in some way. The groups he has taken aim at include: the progressive Left, Alt-Right, Twitter, Feminists, Black Lives Matter, the Media, Establishment gays, Establishment Republicans, and Muslims. It’s in Milo’s unique position as a Catholic-Jewish, immigrant, ex-Twitter user, homosexual man who seems to afford him outsider status to level scathing commentary against all their failings.

A book written by Milo wouldn’t be intellectually true to his character if he remained separated from his cultural critiques. This hits the reader immediately as Dangerous leads with a forward addressing the notorious podcast comments regarding relationships between adolescent men and older men with an un-equivocating condemnation of pedophilia and hebephilia which led to Milo’s public scolding, resignation from several jobs, and retreat from his public tours and speeches. Yet, in nearly the same breath, Milo launches into an unashamed trouncing of the media and leftist culture, bashing their hypocrisy, narrow-mindedness, and willingness to be a proxy for actual pedophiles. At the same time, Milo sets the foundation for the very principle of what his book is about: the free flow and exchange of ideas and that the only true freedom is by taking risks through unpopular and perhaps dangerous conversation.

The tone of Dangerous echoes Milo’s tours and previous writings – provocative, self-aggrandizing, edgy. In promoting Dangerous, Milo had stated that this book would be more research-focused and less centered on lambasting social justice warriors and feminists. While this piece does provide ample research for his factual claims, his attacks on his familiar opponents (and some new ones) remain as pointed as ever. At one point, Milo even questions the intellectual honesty of Star Wars where viewers are expected to believe that Rey was able to beat a trained Sith Master after having only known what the force was for half a day. In short, no one is safe.

This combative tone sets up the Milo narrative: his ideas are true because they are honest, they go to places that people only whisper about, and he goes in further than they would dream of taking an idea no matter the feelings burned along the way. His ideas are more concerned with exposing hypocrisy, illogical cultural indoctrination and its inevitable outcomes, than being necessarily innovative. Milo relentlessly lambasts BLM for their public demonstrations but apparent inability to curb community issues of black on black crime. He openly criticizes Islam for some of its followers committing terrorist acts and takes issue with the policies of majority Muslim countries, which punish some Western societal norms including homosexuality and women’s rights. He undermines Leftist talking points through an in-depth look at campus rape culture, theories of gender wage inequality, and cultural Marxism. He mocks the stuffy GOP establishment types by noting their woefully inadequate ability to bridge a widening base or entertain new ideas. These are only the beginning of the arguments he aimed to undermine in Dangerous.

Just by listing those topic areas, those that dislike the Milo shtick, grandstanding, or arguments (or all three) will find the gloss he lays over his prose to be offensive and unnecessary, though without it, the book wouldn’t have the magnitude that it will have. Those that like Milo will eat up the red meat he casually tosses out like “red pills” for his almost cultish following.

The overarching takeaway though isn’t necessarily the facts Milo lays out, though many arguments are persuasive, but the practice of how to be dangerous with our ideas. The practice of reading ideas you disagree with, verifying them with your world experience and their factual accuracy, and discovering the truth for yourself is vital of any American learner. It’s a methodology that we learned in middle school as young writers, “show, don’t tell” except perhaps in learning it’s “research, don’t regurgitate.” Without grappling with an idea, you can’t really say that you disagree with it.

By that same token, however, if fresh takes and criticism of certain ideas, groups, or religions earns career-ending labels from the Left or moral banishment from the Right, Milo posits that we are doomed to less liberty and a growing task force of thought police. Milo points to the modern Left as hell-bent on parroting “secular shibboleths” akin to an “ouroboros, the ancient Egyptian serpent that eats its own tail, constantly consuming itself in a twisted, never-ending cycle of victimhood, hatred and name-calling.” Milo argues that pushing free expression from the public forum doesn’t mean the thoughts go away, but instead grow into darker, more perverse ideas if not allowed sunlight and enlightened discourse. For Milo, modern “woke” is dreamlike, regressive thought homogeneity.

It’s this uniformity, in which I contextualize this book. One can easily imagine as they read Dangerous, a younger Milo sitting in a prep school in England dressed exactly the same as his peers, sitting in the back of the room, disengaged with the standard rubric of learning, and instead looking for a new, fresh take on old ideas. Think Neil Perry of Dead Poet’s Society. But now, Milo seeks to be the (more fabulous) Mr. Keating of college campuses to break down intellectual sameness and in his view staleness. That’s perhaps how he views himself anyway. But to follow his advice, would require bucking the canon of progressive indoctrination exclusively taught.

Dangerous is work of retaliation against the progressive-labeling machine and a right-wing that has had difficulty embracing a gay man. What has come from this alienation is a work of not-necessarily political philosophy, but cultural philosophy. To be sure, Milo remains as precise as he is nebulous, politely English as he is aggressive. But the work has the foundation of interesting talking points, even if you detest the sarcastic, witty, pompous fluff he uses to ice the cake.  Some themes will have critics searching for any inconsistency or error to discredit the entire work. Still some ideas will ring truer than you would like them to.