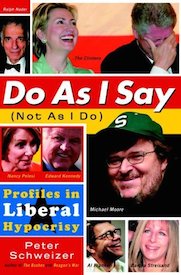 Hypocrisy has proved to be a wonderful weapon for liberals in their war against conservatives. When a pro-family politician gets caught cheating on his wife, or a conservative pundit turns out to have a bad habit or addiction, their enemies use the charge to good effect. Fair enough. But what happens when the spotlights are turned on liberals themselves? Do the supporters of progressive taxes, affirmative action, strict environmental safeguards, and unionized labor practice what they preach? In a word: NO. “Do As I Say (Not As I Do): Profiles in Liberal Hypocrisy” is Hoover Fellow Peter Schweizer’s hard-hitting exposé of the contradictions between the public stances and real-life behavior of prominent liberals like Hillary Clinton, Michael Moore, Al Franken, Ted Kennedy, Nancy Pelosi, Ralph Nader, Barbra Streisand, and many more.

Weeding out the clear charlatans, Schweizer focuses on liberal leaders and spokesman who are generally esteemed by their constituents and have an influence on the broader culture. Using IRS records, real estate transactions, court depositions, news reports, financial disclosures, and their own statements, he brings to light a stunning record of shameless hypocrisy. Critics of capitalism and corporate enterprise frequently invest in companies they denounce. Those who believe the rich need to pay more in taxes prove especially adept in avoiding taxes themselves. Those who espouse strict environmental regulations work vigorously to sidestep them when it comes to their own businesses and properties. Those who are strong proponents of affirmative action rarely practiced it — and some have abysmal records when it comes to hiring minorities. Advocates of gun control have no problem making sure than an arsenal of weapons is available to protect them from dangerous criminals.

“Much of what follows,” writes Schweizer in his introduction, “will strike many people as a revelation precisely because liberal hypocrisy gets a big fat pass from the liberal press, which fails to subject prominent liberals to the kind of intense personal scrutiny that is commonly meted out to conservatives.”

Some of the shocking hypocrisy Peter Schweizer reveals:

Schweizer makes it clear that when it comes to the things that matter most in our lives — protection of family, property, and privacy — even the most outspoken liberals jettison their progressive ideas and adopt conservative principles. In short, he writes, “these do-as-I-say liberals don’t trust their own ideas enough to apply them at home. . . . Which can only make one wonder: If their liberal prescriptions don’t really work for them as individuals, how can they work for the rest of us?”

Tags: Do As I Say, Peter Schweizer