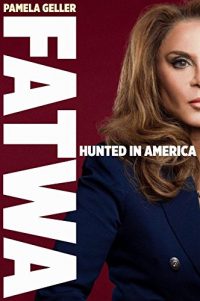 Her critics have called her ‘the most dangerous woman in America,’ ‘far-right hate queen,’ and ‘the anti-Muslim movement’s most visible and flamboyant figurehead.’

Her admirers say she is ‘the Joan of Arc of the counter-jihad movement,’ ‘one of the top world experts in radical Islam, sharia, and Islamic supremacism,’ and ‘a wonderful fighter for liberty.’

Now, in Fatwa: Hunted in America, Pamela Geller tells her own story of how she became one of the world’s foremost activists for the freedom of speech, individual rights, and equality of rights for all.

With the slicing wit and piercing insight that have characterized all her work, Pamela Geller here recounts her unlikely journey from New York City career girl to indomitably fearless human rights activist, reviled by the enemies of freedom the world over. <br<br> ‘I assumed my freedom,’ she writes. ‘Never for one moment did I think that it could be taken from me. But all that changed on one day.’

That day was September 11, 2001, when on a beautiful, bright blue sunny morning, the global jihad struck in America with terrifying and murderous force. The United States of America and the free world as a whole would never be the same again.

Neither would Pamela Geller. In this book, Geller tells the whole extraordinary story of how she began chronicling her take on news events at her groundbreaking website Atlas Shrugs, then moved into activism, at first on behalf of Muslim girls who were being brutalized and victimized at home for not following the misogynistic rules of Islamic law, and then to stand against the advance of jihad and sharia on numerous fronts — above all for the freedom of speech, which is increasingly embattled in this age of jihad.

It’s all here: Geller recounts the battle to defeat the sinister Ground Zero mosque project; the ISIS attack at Geller’s Mohammed Art Exhibit and Cartoon Contest in Garland, Texas; the fatwa issued to her and plot to behead her; and much more including the relentless vilification from a mainstream media hell-bent on defaming and destroying everyone who stands for freedom against jihad terror and sharia oppression.

Pamela Geller writes: ‘Any lover of freedom would have been tarred the same way I was, and many have been. I am but a proxy in this terrible, long war. What has happened to me is what happens, in small and large ways, to every American who stands for freedom.’

If this book is proof of anything, it’s that one person can make a difference. And what a remarkable difference Pamela Geller has made. At last, in Fatwa: Hunted In America, she tells her story.