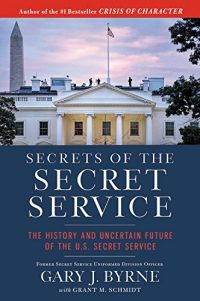 The United States Secret Service is tasked with one of the world’s most important missions: protecting the President of the United States. World stability rests upon their shoulders. When they sign up to lay down their lives for the leader of the free world, they pledge to ensure America’s continuity of government and continued leadership on the world stage.

But unbeknownst to most Americans, that legacy faces a great risk today.

The agency today is fraught with management problems thanks to years of increased politicization. The Secret Services’ strategy and tactics have become increasingly reactive, placing presidential security at risk.

New York Times bestselling author GARY BYRNE, a former Secret Service officer, reveals the agency’s evolution, studying the major attacks it has thwarted and bringing to life the key players, forces and dramatic shifts that have made it what it is today – an elite but troubled protection force.

Secrets of the Secret Service shares action-packed stories from the agency’s past, covering key moments of American history you only think you know about, including the assassinations of Lincoln, Garfield, McKinley, and John and Robert Kennedy – as well as the foiled attempts on the lives of Jackson, Teddy and Franklin Roosevelt, Truman, Ford, Reagan, both Presidents Bush, Clinton, Obama, and Trump.

Secrets of the Secret Service is a unique behind-the-scenes look at what makes the Secret Service tick. It gives the reader an appreciation for the challenges they face every day, from internal and external threats. And it shows the way forward for an agency at a crossroads.