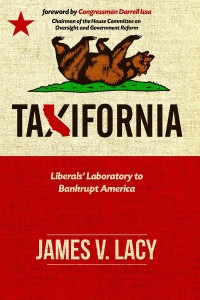 Liberalism is to blame for California’s rotting economy.

The biggest and most important state in America was once a land of opportunity in a wonderful climate.  But times have surely changed.  Things have never been worse for California and its citizens.  California’s “one-party” domination of the liberal faction of the California Democratic Party and their union and environmental lobby cronies have wrecked havoc on California, and all Americans are losing as a result.

Californians are victims of the heaviest taxation in all of America, and those high taxes are now steadily destroying the state’s economy.  Tax-and-spend liberals who are in control have created a state that taxes and regulates more than any other state in the country, and have engineered a rotting economy with among the highest unemployment of any state in the nation.  Its high taxes hurt all Californians by making the state too expensive for business to turn profitable.  Business flight has become endemic.  California’s over-regulation of businesses depresses employment in the state.  A widely accepted tenet among liberal politicians, political science academics, and the media in California is that no development at all is a good thing.

It is a state that educates the worst but pays the best to its teachers, a place that is widely considered by most CEOs to be one of the worst locations in the nation to run a business, where local governments are going bankrupt, and where an out-of-control public employee pay and pension system threatens to gobble up and divert almost all available taxpayer resources to a point where cities and counties simply cannot afford to pay for police, fire, or road maintenance anymore.

California has an outdated environmental policy and an energy policy that makes the state almost totally dependent on one source of power:  imported natural gas.  It is a place where the public employee union worker who controls traffic in the Bay Area Rapid Transit District maintenance yard in poverty-stricken and near bankrupt Oakland is paid more annually than the Chief Justice of the United States Supreme Court in Washington, D.C.

Top leaders of the California Republican Party readily acknowledge their party is in very deep trouble.  Jim Brulte, the state chairman of the GOP and a respected veteran of the California Legislature, has identified the source of the GOP’s sorry condition as a “failure to recognize changing demographics” and has said that Republicans have been too reluctant to venture into communities outside of their traditional power base.  “If we want to be successful, we have to get outside of our comfort zone,” Brulte said.  “Too many Republican Party leaders or Republican elected officials spend all their time talking to the choir.”

Having identified the problems correctly, Lacy offers observations–with over 800 footnotes–about what can be done to restore political balance in the state, as well as some rational ideas for how California can fix its economic problems.  But the economic and political situation in California today is at such an extreme, whether California can ever return to the broad prosperity of the past and once again lead the nation, is a very open question.