Conservative Book Club » Economics & Free Markets » The Road to Freedom: How to Win the Fight for Free Enterprise

The Road to Freedom: How to Win the Fight for Free Enterprise 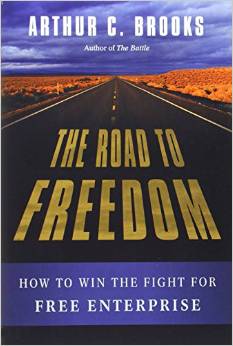 In his revolutionary book “The Road to Serfdom,” German economist F.A. Hayek observed: “No sensible person should have doubted that the crude rules in which the principles of economic policy of the nineteenth century were expressed were only a beginning – that we had yet much to learn and that there were still immense possibilities of advancement on the lines on which we had moved.”

Indeed, in the nearly 70 years since that book, scholars and “sensible” people alike have learned much about how a country can prosper and falter within the frame of a free-market economy. Arthur Brooks has learned a few things and, with a nod to Hayek, describes them in his new book, “The Road to Freedom.”

Mr. Brooks has a background in social science and economics and, as the president of the American Enterprise Institute think tank, has written books on subjects such as philanthropy and happiness – something like the conservative’s answer to “Freakonomics.” He wastes no time describing America’s economic and political origins, how America has drifted from those principles and how America can blend the two vastly different realities to become a modern-day government thriving in a free-enterprise system

From the outset, Mr. Brooks deviates from the typical conservative discussion about how far America has veered from its free-market origins by making an intriguing and swift case for free-market principles not just based on material payoffs, but moral ones. He says the founders themselves did this, when they etched the words “pursuit of Happiness” – a “moral promise front and center in the Declaration of Independence” and it makes for a more convincing case to cynics.

While describing tenets of a free-enterprise system, Mr. Brooks also picks apart the many disparate arguments against it. For example, many people oppose capitalism because they think it hurts the poor and disadvantaged. He argues that those people fail to understand how the free-market system functions and if this could only be corrected, they would see the opposite is true.

His argument for a “system that is fair” is one of the most compelling on this issue. Even conservatives struggle to make a case against redistribution as a method toward creating fairness (especially for the poor). Yet Mr. Brooks argues that redistribution, however fair it may seem, is actually the opposite: “A fair system in an opportunity society rewards merit … an unfair system redistributes resources simply to derive greater income equality.”

Mr. Brooks continues to praise the many facets of the free-enterprise system via a brief history lesson citing the mortality rate and poor quality of life before the Industrial Revolution, which spurred an “unprecedented emergence of free societies and markets” that ultimately were responsible for producing a higher quality of life in virtually every category: from basic medicine and waste management to luxuries such as automobiles and computers.

After absorbing that, it’s hard to see how a 19-year-old boy with scruff on his chin thinks the 1 percent should pay for his college. Indeed, Mr. Brooks remarks, “It is truly galling to see the 2011 Occupy Wall Street protesters demonstrate with signs that read, ‘We are the 99%,’ as if they were somehow treated unfairly by any objective world standard. These protesters, as privileged Americans, are part of the world’s 1 percent.”

Mr. Brooks spends the first four chapters extolling the virtues of the free-market system and, for the cynics, proves study after study why it’s morally responsible and beneficial. Then he takes a sharp turn and brings us back to reality: Nearly half of Americans pay no federal income tax while businesses are more and more regulated (and taxed).

America is in deep debt, and – wait for it – the economy has been declining steadily for the past 50 years. Mr. Brooks thinks both political parties have aided in America’s current economic decline and presents not only big philosophical arguments for change but specific solutions- from Medicaid and Social Security to taxes and spending – too.

It’s an interesting way to structure a book: Like extolling the benefits of eating right, exercising regularly and taking multivitamins to an obese person, then spending the next half-hour telling him he’s got high blood pressure, poor cholesterol and looks fat. The structure provides a strange, albeit occasionally depressing, comfort: You can’t fix something if you don’t know it’s broken and the possibilities of what it might be like once repaired.

The only drawbacks are inherent in a book written by an economist: The onslaught of statistics can become mind-numbingly dissuasive. Despite his emphasis on the moral benefits of a free-market economy, the graphs and studies he uses may fail to be as persuasive to someone living on $15,000 per year. Also, one does also wonder for whom Mr. Brooks has written this little gem packed with economic statistics, moral arguments and a recipe for the pursuit of happiness.

Politically, conservatives will generally agree with the book; in fact, it may bolster dinner-table arguments with the uncle who voted for Barack Obama. But I’d be surprised if someone with more progressive politics could get past the first 10 pages, it’s packed with such conservative jargon and assumptions that entitlements and the like are bad for America. If that’s the case, Mr. Brooks may well be preaching to the choir.

Nevertheless, “The Road to Freedom” is paved with good intentions. If this book, especially the first several chapters that describe so compellingly the unique freedom of the system of government the United States embraces, doesn’t make you want to stand up and salute the American flag, whisper a thanks to your immigrant predecessors or go purchase lunch from your local small business down the street in triumph, nothing will.

Review from The Washington Times, by Nicole Russell