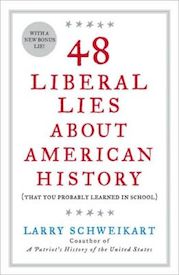 Do you know which images are used more often than any other to represent 20th century America in modern textbooks? If you guessed the moon landing, or John Kennedy, or Ronald Reagan, or even the civil rights marches — go to the back of the class. The correct answer is: the Ku Klux Klan. The fact is, today’s American history texts are giving students a distinctly left-leaning view of their subject — one that routinely portrays the United States as racist and imperialistic; that lauds socialistic wealth distribution while deploring free enterprise; that criticizes American military successes; and that treats convicted Communist spies and other anti-American traitors as martyrs. The result, argues historian Larry Schweikart, is that students graduate from high school and even college with misunderstandings about economics, foreign policy, war, religion, social issues, and many other subjects. Then they carry their ignorance into the voting booth.

Now, in “48 Liberal Lies About American History (That You Probably Learned in School),” Professor Schweikart thoroughly debunks the most widespread and pernicious of these errors, correcting them with carefully documented fact. As he did in his popular A Patriot’s History of the United States, Professor Schweikart corrects liberal bias by rediscovering facts that were once widely known. Here, however, he explicitly challenges authors of popular textbooks who, in pursuit of a left-wing agenda, falsify American history — showing how they distort facts and manipulate data in an effort to appear objective and conceal their bias.

With an easy-to-read yet detail-rich style, Schweikart proves that, while America has never been perfect, our nation is far more admirable than you were probably taught. Among the 48 myths Larry Schweikart debunks:

“One reality is certain,” writes Schweikart. “If those who read history are grounded in truth, bias will reveal itself in no time. And once that happens, the market for politically correct, agenda-driven textbooks will dry up and blow away like the marijuana leaves at Woodstock.”