Cheney One on One: A Candid Conversation with America’s Most Controversial Statesman 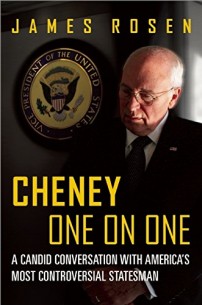 A small fraction of the interview was adapted into an April 2015 Playboy interview; but now, Rosen shares the whole, incredible conversation. With no topic off limits, the former vice president opened up about his complicated relationships with President George W. Bush and former Secretary of State Condoleezza Rice, and talks candidly about why his influence in the White House waned over Bush’s second term.

Rosen also presses Cheney about his WWII-era childhood, his two DUI arrests and expulsion from Yale, his political coming-of-age during the Watergate era, his reflections on 9/11 and the Iraq War, his misgivings about Syria and North Korea, his role in the development of the CIA’s “enhanced interrogation techniques” and the NSA’s warrantless surveillance program, and his views on life, death, and God.

Cheney One on One is an essential document of modern America: a major oral history whose every page contains important and fascinating recollections of one of the most tumultuous periods in our nation’s history, from one of its most powerful and controversial figures.

Tags: Cheney One on One, Dick Cheney, James Rosen