A Choice Not an Echo: Updated and Expanded 50th Anniversary Edition 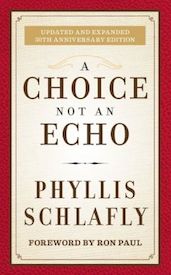 Sometimes a book can alter history as did Harriett Beecher Stowe’s best-selling anti-slavery novel, Uncle Tom’s Cabin, published shortly before the Civil War. Modern American politics was decisively altered by a slim paperback, A Choice Not an Echo, written by the redoubtable Phyllis Schlafly in 1964 and now released by Regnery Publishing in an updated, expanded 50th anniversary edition.

The theme of A Choice Not an Echo is simple and provocative: leaders of the Washington-based Republican establishment have dominated the presidential nominating process of the GOP since 1940, turning back—often by hook and crook–all attempts of conservative Republicans to nominate one of their own. The exceptions in nineteen national conventions were Barry Goldwater in 1964 and Ronald Reagan in 1980 and 1984.

What is the objective of the liberal “kingmakers”? To maintain control of a Republican Party committed to measured implementation of the New Deal and the Great Society at home and placing global interests ahead of American interests abroad. The defeat of a candidate—such as Tom Dewey in 1948, Bob Dole in 1996, John McCain in 2008 or Mitt Romney in 2012—does not faze them. The critical question for them is: Who shall rule the GOP and keep it on a neo-progressive path? Nothing alarms the kingmakers more than a candidate who offers a conservative choice and not a liberal echo.

Which is why they fought so hard to deny Senator Goldwater the Republican presidential nomination. As Schlafly wrote, the Republican Party had in Goldwater an “obvious, logical, deserving, winning candidate”, someone who combined “the integrity of Robert A. Taft with the glamour of Dwight Eisenhower,” a national candidate with a demonstrated following in all 50 states, and “a candidate with genuine appeal of the youth of America.” Barry Goldwater, she said, “is the one Republican who will not pull his punches to please the kingmakers.”

Do not let the kingmakers do in 1964, Schlafly urged, what they have done at previous conventions—block the nomination of a conservative and select a liberal who will again lead the party down the road to defeat. Schlafly said she wrote and self-published her book to prevent the kingmakers from forcing “upon us another `me-too’ candidate who will … evade the vital issues.” The last line of A Choice Not an Echo reads:

“I made my decision, fellow Republicans, how about you?”

Here was a call to action that conservatives had been waiting for. They

began buying and distributing copies of A Choice Not an Echo in such volume that by the end of the year over 3 million copies had been sold. As I can personally attest, the book had its greatest impact in the California Republican primary.

Goldwater was well on his way—due in large measure to the political skill of F. Clifton White–to capturing enough delegates to assure his nomination at the July convention in San Francisco. But the press kept harping on the fact that Goldwater had not won any large primary—his decisive Illinois win was dismissed as an aberration. If he couldn’t defeat Gov. Nelson Rockefeller of New York in the California primary, they asked, how could he be expected to do well in the general election in the fall?

As it happens I was part of a team sent from Goldwater headquarters to direct the California effort. One of our most effective campaign aids was A Choice Not an Echo, which we distributed by the thousands in Goldwater and even Rockefeller precincts up and down the state. Our polling showed that where we handed out copies of A Choice Not an Echo our margin went up. Simply put, it inspired people to go to the polls.

Beyond question, A Choice Not an Echo significantly contributed to our California win and assured Barry Goldwater’s nomination. And that materially affected the future of modern American politics because without presidential candidate Goldwater in 1964 there would have been no President Reagan in 1980. Remember, it was Goldwater who gave Reagan the opportunity to deliver his famed TV address “A Time for Choosing” that made him a national political star and led Republicans to urge him to run for governor of California.

In the updated and expanded edition of A Choice Not an Echo, Schlafly deftly describes every convention from 1968 through 2012 demonstrating that when the liberals prevail Republicans lose—Dole, McCain, Romney–and that when conservatives nominate someone on the Right like Reagan, the GOP wins, and big.

Phyllis Schlafly is a remarkable woman of many talents—brilliant organizer, shrewd political analyst, committed conservative—not the least of which is her ability to write clear compelling prose. As she did in 1964,  Schlafly seeks with this new edition of A Choice Not an Echo to persuade conservatives to rally around the most conservative candidate who can win in November 2016.

Because they constitute a majority within the GOP, conservatives need not accept me-too candidates, she argues,  but should look for leaders who support “a pro-American foreign policy,” “real tax cuts and a major reduction in Big Government,” and the “Creator-endowed rights of every individual to life and liberty.” As she did fifty years ago, Schlafly issues a challenge to grassroots conservatives to engage in the political battle and ensure the nomination of  presidential and congressional leaders who offer a conservative choice and not a liberal echo of past failed policies.