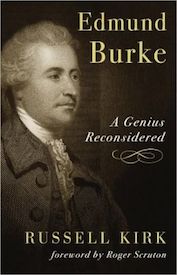 By the late 1930s, what with the sit-down strikes, the effort to subdue the Supreme Court, the ready welcome to the neo-mercantilism of Keynes, the new politics of bloc and class and the implacable insistence in “ruling circles” that communism was merely an improved form of democracy, it became apparent that Edmund Burke was more relevant than ever. In the lee of the Yale Law School, many of whose faculty were out for the court reorganization proposal, a provincial newspaper suggested editorially that even then some young scholar was doubtless readying a reintroduction of Burke to contemporary readers. The young scholar emerged pretty much on schedule in 1953 when Russell Kirk, with proper reference to Ross J. S. Hoffman’s studies, published The Conservative Mind. Its first section was devoted to Burke and Burke keyed the whole analysis up to and including Santayana and, in a later edition, Riot.

Only a man of Kirk’s provenance and ambiance would have been appropriate for the job-to reassert, by way of Burke, “the natural law tradition (against) the positivism, nominalism and scientific materialism of modern liberal thought,” as Carl Cone has put it. Kirk was a countryman, educated wholly outside the dominion of thought and attitude of the great urbanized northeast universities. To this day he lives away from cities, in the country town of his fathers. The first editor of Modem Age, he remains perhaps the last American type of the private and unattached thinker who once flourished in Britain and of whom Thoreau was an earlier (though, of course, within the likeness, quite dissimilar) example in the United States. In this relatively brief book, the first of a projected “Architects of Freedom” series for the general reader, Kirk offers a narrative and expository rather than a critical account of Burke’s life and work.

He goes swiftly through the Dublin boyhood in the family of a rather rigid barrister of the Anglican persuasion, whose wife and in-laws were all Catholic (as Edmund’s own wife was to be) , young Burke’s school career at Abraham Shackleton’s excellent Quaker establishment in the County Kildare, his rage of learning at Trinity College, where at nineteen he completed the first draft of his “Ideas of the Sublime and Beautiful,” the gathering tension between father and son, the apparent relief of both when Edmund departed for study at the Middle Temple. Then come the early nine London years of which we know little, except that Burke’s interest in legal studies gradually nave way to journalism, historical writing, editorial duties on the Annual Register, and finally a full surfacing in the brilliant literary world with his reply to Bolingbroke, the famous and ironical “Vindication of Natural Society.”

Kirk tells this story of date and detail in a leisurely prose which sometimes echoes the orotundity of his master. But his real interest is the political, polemical, and ultimately philosophical Burke and while he reports dutifully on Ireland, America, India, and domestic England, it is the Burke of the French Revolution that Kirk finds most relevant to another age that also has its own armed doctrine to harry it. Carl Cone’s big two-volume biography of Burke, now the standard, devotes part two of volume two to the revolution in France. In Kirk’s book, a fifth as long as Cone’s, four out of nine chapters deal with Burke’s prescience in forewarning that Jacobinism would erode the Christian order of Europe and make way for some popular general. Burke was right, of course, but as C. J. Fox said, he was right too early. Fox forgave him, but other defenders of the Revolution, and the Enlightenment of which it was the executive arm, have been unrelenting to this day. “It seems to be difficult to take Burke calmly,” said Alfred Cobban, one .of the English Burke scholars, speaking in some part for himself. In the United States anti-Burkeans talk jocosely of “St. Edmund,” agreeing pretty much with Cobban that Burke “is now being beatified (in America) to provide a respectable ancestry for a neo-conservatism which might otherwise be revealed as the mere defense of vested interests…”

It is against this last judgment that Kirk‘s book will largely fend, as well as against that special version of it which insists that Burke is irrelevant to the American scene because we don’t have any dukes and ride space ships in what was formerly called heaven. But the men in the space ships must cocoon themselves in a precise facsimile of the terrestrial environment of their fathers; how strange then that scientific materialists, bound as they are by their credo to root ideas and aspirations in mere physical structure, sup pose that space-age man who still can’t live without bread, learned abruptly after 1793 to live on bread alone! When Khrushchev’s cosmonauts were aloft, he has told US, they saw no angels, much less any intimations of God. Yet one miscalculation in the discipline of cosmic physics would have doomed them; and there is amusement in our time as there was in Burke’s at thinkers bold enough to doubt, but too timid to infer the unseen from what most palpably is seen.

As for the dearth of dukes in the United States, it must be conceded, and there isn’t much point in arguing with men who say that an America raised on Blackstone had no dukes in its constitutional history because the constitution forbade it-though they admit that England had Catholic kings right up to the no-popery amendments to the British constitution. But Professor Galbraith has just finished proving that we have what might be called corporate dukedoms, which move ever closer to an executive who looks to some people more like a king than Washington ever did or than Hamilton would have dreamed of. Burke lived, sure enough, at the beginning (as we may live at the end) of the one brief interlude in an otherwise all but universal history of plenary government. But the whole point is that Burke helped to bring the interlude on, and so conceivably, could help to prolong it. Kirk shows us how Burke invented party, which, with Adam Smith’s assertion of trade and property’s right to manage, put curbs on the Prerogative and took them off the citizens. In our time the corporate dukedoms, progressively sapped of managerial authority by three decades of mercantilist legislation and jurisprudence, meekly yield the management function back to government. (Ask the six railroad shopcraft unions.) And the state of our party politics is suggested by the warning of the prevailing intelligentsia that the two-party system may survive only if the outs are identical with the ins. This is not too far from Bolingbroke’s insistence that the Patriot King “must govern, more properly subdue, all parties. . . .” Surely, the Burke who, instead, subdued Bolingbroke has meaning today in our drift back to the patriot king!

It is the ultimate value of Dr. Kirk’s book that he moves beyond date and detail to Burke’s larger view of the humane commonwealth and the “vested interests” which the contemporary Burke fanciers do indeed defend. Party and property, though essential, are not enough. There must be consensual intuition of a political order answering human needs because reflecting human nature, with forms both immanent and transcending. Civilization is an artifact, fragile, unstable, and must be kept up like a house or a cathedral. The constitution is not simply what the court says it is when judges take their oath they do more than swear merely to uphold what they will uphold. Men are good but imperfectible, which means they are also bad and must at least take care to keep the two qualities in balance, or at best a-tilt on the benign side. This generation is not all-in-all, for much that it enjoys it has had from the past, and by that fact is bound to pass on essential things to those who will come later. Time requires change, but human needs diversify around a core of permanence. And separate man is unlikely to succeed in inventing new moralities and simply doesn’t have time to plan every next step apart from the received wisdom and faith encapsulated in culture and tradition.

Some who call Burke outmoded merely impute to his substance what they find in his admittedly un-Hemingway-like style. Kirk updates his phraseology and cadence while remaining faithful to his theme, but the counter-Burkeans may prefer an interpreter less engaged. Well then, Alfred North Whitehead was anti-Burke on the French Revolution, but built a philosopher’s theory of politics out of the Reflections, candidly acknowledging the source. “Those societies,” said Whitehead, “which cannot combine reverence to their symbols with freedom of revision must ultimately decay . . . either from anarchy, vor from the slow atrophy of a life stifled by useless shadows.” What Whitehead meant is what Burke had meant, and what Kirk and his company now mean as the smoke from our burning cities deepens the shadows of the Twilightenment.