The Political Principles of Robert A. Taft 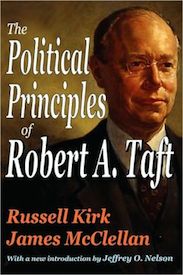 Robert Alphonso Taft of Ohio-more perhaps than any other American public official in contemporary history-has been called an unofficial “prime minister” of our republic. Certainly, he set the tone for the first Republican administration in twenty years in 1952 and personally guided the Republican chief executive w h e a t best-must be regarded as politically naive. Twice, Taft himself had come within a hair of being the Republican nominee for President; and it has been suggested-quite reasonably-that the reason for his political defeat was his own personal integrity.

In this book, made possible as a project of the Robert A. Taft Institute, Russell Kirk and James McClellan attempt-quite successfully, one must note-to put the basic political principles by which Taft lived and worked into perspective. Their task is particularly noteworthy since Robert A. Taft’s integrity-and, indeed, his entire view of government’s role in the lives of free men-set him so much at odds with the prevailing political trends and personalities of his, and our, lifetime. It is as important to understand what the authors have not attempted to do here as it is to recognize their purpose. This volume, after all, is intended merely as an introductory guide to the life, thought, and political career of Senator Taft. Theirs is not a highly detailed biography nor is it a cataloguing of public acts and utterances. Rather, Kirk and McClellan have drawn from Taft’s conduct of his public life and his statements a coherent and cogent analysis of what Taft, the man, stood for. The essential raison #&re of any public man is infinitely more of consequence than all the superficial mannerisms he may adopt publicly or otherwise possess. It is that kind of motivation-the purposeful principle- the authors reveal.

Taft was, the writers show, a man to whom the “whys” of public performance were of more importance than mere style. In other words, Robert Taft is seen as a man who would have been very uncomfortable in today’s political world where Presidential aspirants are groomed by Madison Avenue, where principles are tailored’ fitted like a suit, to a candidate’s image.” Because of our society’s increasing acquiescence to the computerized, LC overnight star” politician-candidate, a book dealing with a seminal American politician who never approached public affairs in such a flamboyant manner is not only revealing but sobering.

Robert Taft’s career is revealed as .one of articulate and enlightened opposition to the near-totalitarian dominance of the Democrats’ New Deal. Kirk and McClellan explicate Taft’s broader political principles from their compilation of his stands on specific issues. For example, they trace his initial Senatorial fight against the Gilbertsville dam project, another behemoth in the already burgeoning Tennessee Valley Authority. It soon becomes evident, however, that Taft’s fight on the Senate floor was more than momentary opposition to a flagrantly obvious piece of “pork-barrel” leg islation. “Grandiose planning of this sort, Taft believed, was contrary to the American political system; it could be achieved only through propaganda and compulsion.” Thus, from the specific issuethe battle of the moment-emerges the broader line of political principle. Such an approach is used throughout this work, and because of their non-partisan and honest analysis, Kirk and McClellan’s concise volume undoubtedly will remain a necessary point of departure for all future Taft scholars.

Early in their study, the authors explain that one of the difficulties encountered in their pursuit of Taft’s political ideals was the Senator’s own infrequent writing, of setting down on paper-for future students to ponder-his political first principles. Taft, they point out, “published no regular manual of his opinions. . . . his thought must be extracted from the immense mass of his remarks in the Congressional Record and his other political addresses, and from occasional articles he wrote for magazines.”

How well the authors have succeeded in their task of succinctly capturing the essence of Taft’s thought in this thin volume is best seen in Chapter VIII entitled “A Foreign Policy for Americans,” which was also the title of Taft’s .only book. The thought of any great political figure is valuable primarily because of its continuing relevancy to the affairs of men, specifically, in the application the politician’s views have to the solution of problems still facing the society for which he wrote. In such a sense, the foreign policy proposals of Taft–seen in the light of the United States’ current chaotic involvements abroad -are relevant indeed.

In A Foreign Policy for Americans, Taft wrote in 1951: “Unless our foreign policy is conducted more competently than it has been during the past ten years, our very survival is in doubt.” Unlike so many other forgers of American foreign policy in recent history-both Democrat and Republican- the survival of the United States was to Robert A. Taft a viable and logical first premise of internationalism; his was an articulate nationalism from which all foreign policy planning must be derived.

So it is that Kirk and McClellan wisely have given considerable emphasis not only to Taft’s book in this chapter but also to his notable foreign policy address to the American Assembly on May 21, 1951. In that speech, Senator Taft said:

My view is that American foreign policy should be directed primarily to the protection of the liberty of the people of the United States, and that war should only be undertaken when necessary to protect that liberty, that we are not justified in going to war simply to increase the standard of living of the people throughout the world, or to protect their liberty unless such protection is necessary for our own defense.

Those seeking to apply Taft’s foreign policy formula to today’s events in Southeast Asia would find no rationale for America’s initial intervention in Vietnam. Senator Taft specifically warned against the United States trying to control or defend land masses in either Asia .or Europe. Likewise, Taft saw the need for “definite limitations” on American commitments if our nation was to avoid wrecking both ita economy and its morale.

These policy formulations, however, must in no way be regarded as indicative that Taft underestimated-or failed to recognize accurately-the aggressive nature of international communism. Once the issue was joined-as it was in Taft’s time in Korea, and as it is now in Vietnam -Taft would have advocated pursuing the crisis to a solution most satisfactory to the interests of the United States. Similarly, one gathers he would have endorsed even more sweeping use of both air and sea power in times of crisis, since he invariably argued for those instruments as key elements in the maintenance of U.S. policy.

This same section gives considerable insight into Senator Taft’s unceasing opposition to the arbitrary concentration of power in the hands of the U.S. chief executive, Due attention is given, for example, to Taft’s concern about the American President’s willingness to acquiesce to policy decisions of the United Nations Organization. He felt Congress should retain a truly active role in the conduct of the foreign affairs of the republic. He opposed the concept of a President who “could send tra~ps to Tibet to resist Communist aggression or to Indo-China or to anywhere else in the world, without the slightest voice of Congress in the matter.” Those in Congress today who are most skeptical about their earlier support of the vaguely worded Tonkin Resolution may have Taft’s words haunting them. Indeed, their fears may grow greater as even more drastic actions are taken in the future by executive fiat.

What finally emerges from the authors’ portrait of Taft is a man who stood not against change, but one who stood for orderly change. Similarly, Taft was to become a symbol of permanence in the American nation when most of his political associates flirted with the easy substitution and the trivial:

Taft was, the authors declare, comparable to Edmund Burke in his knowledge that “healthful change must be in harmony with the historical experience of the nation.” In his Rejlections on the Revolution in France, Burke wrote that

The nature of man is intricate; the objects of society are of the greatest possible complexity; and therefore no simple disposition or direction of power can be suitable either to man’s nature or to the quality of his affairs.

It was a statement Taft-as his character is seen in this new book-would have heartily approved; it was, as well, a fitting description of the principles he followed in his own political journey.

Tags: Russell Kirk, The Political Principles of Robert A. Taft