Conservative Book Club » History » Liberal Fascism: The Secret History of the American Left from Mussolini to the Politics of Meaning

Liberal Fascism: The Secret History of the American Left from Mussolini to the Politics of Meaning 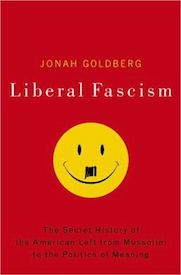 “Fascists!” “Brownshirts!” “Jackbooted stormtroopers!” Such are the insults typically hurled at conservatives by their liberal opponents. But who are the real fascists in our midst? In “Liberal Fascism,” National Review columnist Jonah Goldberg shows that the original fascists are really on the left — and that liberals, from Woodrow Wilson to FDR to Hillary Clinton, have advocated policies and principles remarkably similar to those of Hitler and Mussolini.

Replacing manufactured myths with enlightening research, Goldberg begins by showing how the Italian fascism, German Nazism and American Progressivism (forebear of modern liberalism) all drew from the same intellectual foundations the idea that the state can create a kind of social utopia for its citizens. He then traces fascism’s history in the U.S. — from Woodrow Wilson’s war socialism and FDR’s New Deal to today’s liberal push for a greater alliance between big business and government. Finally, Goldberg reveals the striking resemblances between the opinions advanced by Hitler and Mussolini and the current views of the left on such diverse issues as government’s role in the economy, campaign finance reform, campus “speech codes,” education, environmentalism, gun control, abortion, and euthanasia.

Impeccably researched and persuasively argued, Liberal Fascism will elicit howls of indignation from the liberal establishment — and rousing cheers from the right.

“‘It is my argument that American liberalism is a totalitarian political religion,’ Jonah Goldberg writes near the beginning of Liberal Fascism. My first reaction was that he is engaging in partisan hyperbole. That turned out to be wrong. Liberal Fascism is nothing less than a portrait of twentieth-century political history as seen through a new prism. It will affect the way I think about that history — and about the trajectory of today’s politics — forever after.” —-Charles Murray, author of “Human Accomplishment” and coauthor (with Richard J. Herrnstein) of “The Bell Curve”

“In the greatest hoax of modern history, Russia’s ruling ‘socialist workers party,’ the Communists, established themselves as the polar opposites of their two socialist clones, the National Socialist German Workers Party (quicknamed ‘the Nazis’) and Italy’s Marxist-inspired Fascisti, by branding both as ‘the fascists.’ Jonah Goldberg is the first historian to detail the havoc this spin of all spins has played upon Western thought for the past seventy-five years, very much including the present moment. Love it or loathe it, Liberal Fascism is a book of intellectual history you won’t be able to put down — in either sense of the term.” —Tom Wolfe, author of “Bonfire of the Vanities” and “I Am Charlotte Simmons”

“Liberal Fascism will enrage many people on the left, but Jonah Goldberg’s startling thesis deserves serious attention. Going back to the eugenics movement there has been a strain of elitist moral certainty that allows one group of people to believe they have the right to determine the lives of others. We have replaced the divine right of kings with the divine right of self-righteous groups. Goldberg will lead you to new understanding and force you to think deeply.” —Newt Gingrich, former Speaker of the House, author of “Winning the Future”

“Jonah Goldberg argues that liberals today have doctrinal and emotional roots in twentieth century European fascism. Many people will be shocked just by the thought that long-discredited fascism could mutate into the spirit of another age. It’s always exhilarating when someone takes on received opinion, but this is not a work of pamphleteering. Goldberg’s insight, supported by a great deal of learning, happens to be right.” —David Pryce-Jones, author of “The Strange Death of the Soviet Union”

“Jonah Goldberg brilliantly traces the intellectual roots of fascism to their surprising source, showing not only that its motivating ideas derive from the left but that the liberal fascist impulse is alive and well among contemporary progressives-and is even a temptation for compassionate conservatives.” — Ronald Bailey, science correspondent for Reason magazine