Suicide of the West: How the Rebirth of Populism, Nationalism, and Identity Politics Is Destroying American Democracy 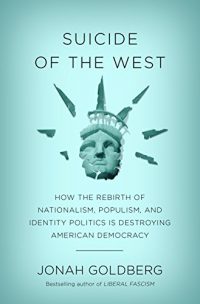 Combining intellectual history, social science, economics, and pop culture, bestselling author of Liberal Fascism, National Review senior editor, and syndicated columnist Jonah Goldberg makes the timely case that America – and other democracies – must actively defend liberty against forces pulling us back to the tribal and nationalistic ideologies of the past.

The West is dying from ingratitude. Democracy and liberty were accidents of history. If capitalism were natural, it would have popped-up long before the 1700s, when humanity stumbled into a miraculous explosion in human prosperity. This miracle was not delivered by God or created by machines. It came from new ideas and values. But what is created by ideas and values can be destroyed them.
In this age of resentment, we reject the gift of liberty and instead listen to the lesser angels of our nature. We find comfort in authoritarianism, tribalism, identity politics, nationalism and aristocracy, all of which brutalized humanity for millennia.

Goldberg exposes the West’s suicidal tendencies on the left, but also on the right – at a moment when many conservatives are surrendering to tribalism and nationalism.  Suicide of the West asserts that for the West to survive, a renewed commitment to classically liberal principles is required. Suicide is painless; liberty takes work.