The Tyranny of Cliches 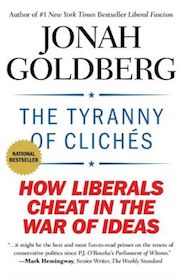 One of the overlooked aims of Jonah Goldberg’s bestselling Liberal Fascism: The Secret History of the Left From Mussolini to the Politics of Meaning was to defang, to a degree, the word “fascism.” Not to defend it, but to identify it as a body of ideas that, however noxious, did not necessarily entail mass murder.

The book overstated the continuities of intellectual fascism with modern American liberalism and European social democracy, but Goldberg’s premise—that fascism was not a variant of conservatism but rather a revolutionary movement of the left—was a worthwhile corrective to mainstream political discourse.

With The Tyranny of Clichés, Goldberg—syndicated columnist and editor-at-large of National Review Online—is on another mission of semantic rectification. He is exercised this time with the way the words “ideology” and “pragmatism” are employed by liberal academics and politicians, as well as in the vernacular of Washington media. Goldberg argues that “ideology” should sound less sinister than it commonly does. And he’d like “pragmatism” to sound worse.

There’s also a second book here: a deconstruction of  liberal shibboleths that Goldberg encounters on college campuses and cable-TV shout shows as an occupational hazard of successful punditry. He skewers these in a style that’s informative and light on its feet. Of particular value are Goldberg’s sturdy defense of the Roman Catholic Church’s record on science and its prosecution of the Crusades, as well as a brilliant little elucidation of the saying, “let them eat cake.”

The big argument of The Tyranny of Clichés is that liberals’ misuse of terms like “ideology” and “pragmatism,” and their lazy reliance on empty phrases like “social justice,” “diversity,” and “community” are part of a deceptive agenda to “expand and enhance the State’s mastery over our lives.” An ideology, if you will, that refuses to speak its name.

There’s a problem of coherence here: several of Goldberg’s examples of liberal clichés—“Power corrupts,” “Better that ten guilty persons escape than that one innocent suffer,” “One man’s terrorist is another man’s freedom fighter,” “Violence never solves anything”—may easily be interpreted as expressions of anti-statism. There’s also the fact that in a policy environment where a purportedly liberal U.S. president keeps his own personal terrorist “kill list,” and at a time when a scandalously high number of Americans are in jail, Goldberg’s worry over such influences is unwarranted and more than a little puzzling.

Goldberg, too, briefly calls out James Fallows and other advocates of “industrial policy,” the practice of government actively encouraging the growth of certain sectors of the economy. Is it statism? Yes, I suppose it is. But is it a cliché?

Now, about this business of ideology: an adherent of an ideology, Goldberg writes, isn’t someone who is “dogmatically immune to facts.” For Goldberg, ideologies are like that unprintable cliché about opinions. Everyone has one. He writes: “An ideology, at the most fundamental level, is simply a checklist of ideas you have about the world.  Having an ideology doesn’t mean you’ve been brainwashed, it means you’ve come to conclusions about how the world works at some basic level.”

To be sure, some ideologies—fascism, to name one—can be very bad. But ideology is not bad in and of itself. Indeed, ideology is an essential feature in the life of the mind as well as a practical necessity, he argues: “whatever word you choose, humans need limiting principles, bright lines, ideals, dogma. Bundle them together and you’ve got a field guide to life that helps you sift your way through new facts and data.”

Goldberg’s point here is well-taken. Still, I’m rather fond of the negative connotation of ideology, not least because, as the author readily acknowledges, conservative luminaries like Edmund Burke and Russell Kirk plainly held ideology in low regard. “But,” he writes, “it’s vital to understand that what the original conservatives denounced as ideology was in fact only a certain kind of ideology.” Goldberg insists that Burke’s foundational critique of the French Revolution wasn’t a blanket denunciation of ideology; it was a warning against utopianism and the glib discarding of ancient wisdom.

I can live with that distinction. Yet our lexicon still requires a word to describe someone whose mind is made up before the argument even starts. Take the belief that income-tax cuts are self-financing. Against all evidence, many supply-siders maintain this belief. If they aren’t ideologues, what should we call them? Stubborn? Stupid? Or, to borrow one of Goldberg’s favorite put-downs, incandescently asinine?

If only because I’m determined to rescue him from obscurity, I suggest as an alternative to “ideology” a catchword used by the late poet-historian Peter Viereck: “apriorism.” In Conservative Thinkers: From John Adams to Winston Churchill, Viereck described early conservatives’ use of the term a priori “for ideas deduced entirely from ‘prior’ ideas, as opposed to ideas rooted in historical experience. … Conservatives condemn, with the term ‘rationalist blueprints,’ the attempts of progressives to plan society in advance from pure reason instead of letting it grow ‘organically’—meaning: grow like a living plant, naturally and unconsciously, flowering up from the deep roots of tradition.”

We might also, in some cases, fall back on the more familiar “absolutism.” Most of us favor a broad right to free speech and expression, for example. But only an absolutist would defend child pornography or speech that incites violence.

Or perhaps another old stand-by, “tribalism,” should be pressed into service. Tribalists of the Drudge-Breitbart-RedState right, for example, were not merely “dogmatically immune to the facts” in the wake of  the Great Crash of 2008, they mounted a furious effort to bend the facts to absolve their worldview of any blame for the crisis, concocting a bizarre narrative in which all trails led to the Community Reinvestment Act of 1977.

Now what of Goldberg’s beef with the term “pragmatism”?

The Tyranny of Clichés extends the effort Goldberg made in Liberal Fascism to revive the textbook association of the term pragmatism with the school of American philosophy developed in the late 19th century by the likes of William James, as against today’s popular meaning—a practical emphasis on “what works,” a reliance on empirical data rather than abstract theory. And not just any theory, Goldberg asserts: the original pragmatists sought to steer us away from our classical-liberal roots. For Goldberg’s pragmatists, the facts always seem to point toward a more active—progressive—role for government.

There’s a fair amount of truth to this, but in the course of linking philosophical pragmatists to today’s vernacular pragmatists, Goldberg is forced to become, in effect, the Corey Robin of the right. He obliterates important distinctions. In The Reactionary Mind, Robin, a Brooklyn College poli-sci professor audaciously seated Sarah Palin and Ayn Rand and Edmund Burke at the same banquet table. The Goldberg schema is awfully similar. At his table, you can find the pacifist Jane Addams seated next to violence-approving Georges Sorel, who’s passing the gravy to earnest Methodist Hillary Clinton.

Goldberg paints progressives influenced by philosophical pragmatism as godless Nietzschean supermen. In fact, pragmatists tried to re-inject God into philosophy in the wake of Darwinism. As the critic Louis Menand wrote in The Metaphysical Club: A Story of Ideas in America:

Pragmatism seems a reflection of the late-nineteenth-century faith in scientific inquiry—yet James introduced it in order to attack the pretensions of late-nineteenth-century science. Pragmatism seems Darwinian—yet it was openly hostile to the two most prominent Darwinists of the time, Herbert Spencer and Thomas Huxley; it was designed, in James’s version, to get God back into a picture many people felt Darwin had written him out of.

They were not relativists, either. Menand writes that Charles Sanders Peirce, who coined the term “pragmatism,” believed with his astronomer father that the “universe makes sense”; that the world and the human mind are “wonderfully matched.”

How to square Goldberg’s assertion that pragmatism was a “happy and upbeat” American alternative to “gloomy” Europeans like Nietzsche? Such a dichotomy makes little sense in the context of the searing intellectual formation of the jurist Oliver Wendell Holmes Sr., the thrice-wounded Civil War veteran whose youthful abolitionist zeal soon gave way to deep-seated—in its way, conservative—pessimism over the descent of American democracy into mass violence. This pessimism, noted Menand, was the animating purpose behind Holmes’s “marketplace of ideas” dictum: the way to prevent another such descent was to create a big tent of competing ideologies.

But I fear we’re dancing on the head of a pin. The simple fact is that pragmatism is no longer a Trojan horse for statism. As often as it means acceding to “what works,” it means a willingness to compromise on one’s principles, whether those are conservative or liberal. To my knowledge, Sen. Bernie Sanders and Rep. Dennis Kucinich are not regularly called pragmatic. Yet President Bill Clinton’s tack toward the center on issues such as welfare and capital punishment is regularly characterized that way.

And this entire discussion is worthless if we don’t pause to define what liberals mean whey they say they’re in favor of “what works.” Works to what end? The modern liberal’s project was defined centuries ago by Francis Bacon as the “relief of man’s estate.” On the fundamental appropriateness of this project, there is little disagreement between liberals and mainstream conservatives.

Patrick Deneen, the conservative Catholic political theorist who recently joined the faculty of Notre Dame University, wrote an illuminating 2008 blog post [1] that I beg you to indulge my quoting at length:

Good policy for the Founders and Progressives alike were policies that promoted the economic and political strength of the American republic and the attendant expansion of power in its private and public forms. For all their differences, what is strikingly similar about the thinkers of the Founding era and leading thinkers of the Progressive era were similar efforts to increase the “orbit” or scope of the national government concomitant with increases in the scale of the American economic order. Only in the backdrop of such assumptions about the basic aims of politics could there be any base presupposition in advance of the existence of ‘good policy’—and that policy tended to be whatever increased national wealth and power. In this sense—again, for all their differences—the Progressives were as much heirs as the Founders to the modern project of seeing politics as the means of mastering nature and ‘the relief of man’s estate.’

The Founders and the Progressives alike sought to increase the influence of the central government over disparate parts of the nation, while increasing economic efficiency and activity by means of investment in infrastructure and communication. Just as the Founders could promote the ‘useful arts and sciences’ with one of the main positive injunctions of the Constitution, so a Progressive like John Dewey would praise Francis Bacon as ‘the real founder of modern thought’ for, among other things, his insistence that ‘knowledge is power’—or, implicitly, for maintaining that only discoveries or information that increase human power over nature are worthy of the name ‘knowledge.’ For all of Dewey’s valorization of ‘democracy,’ it should not be forgotten that his definition of democracy is bound up in whatever outcome would ultimately favor ‘growth.’ For the Founders and the Progressives alike, the expansion of what Madison described as ‘the empire of reason’ should be paramount, and on that basis trust in popular government was to be tempered by structural limits upon popular influence over good public policy.

Goldberg concedes, vaguely, that the relief of man’s estate does require “some policies.” But too much relieving is to “eat the seed corn of social capital.” In the words of Rep. Paul Ryan, it is to create a “hammock that lulls able-bodied citizens into lives of complacency and dependency.”

A double-barreled cliché is in order here: on this fundamental question of what politics is for, The Tyranny of Clichés lets conservatives eat cake and have it, too.

Book Review from The American Conservative, by Scott Galupo