Statecraft: Strategies for a Changing World 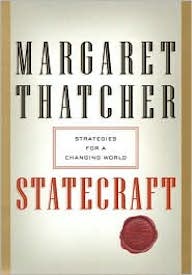 Margaret Thatcher’s Statecraft is subtitled Strategies for a Changing World.  The book is part memoir, part critical analysis of the cultural, political and social world, and part strategies that should govern the nature of statecraft now.

She does not account for statecraft as it has evolved over history.   Lady Thatcher’s interests are contemporary to her time, and perhaps more sobering since she believes the nature of statecraft now can be summed by the expression of “globalism,” the realities behind the term, international interventions, justice and economics.  Her analysis, then, is applied to different countries and continents.

Lady Thatcher’s warnings are to recognize tragedies before they happen, to remind ourselves of lessons learned before we repeat the mistakes of those lessons on a vaster scale.  “Globalism” is one more example of the tyranny of a bad idea.  This marvelous reflective book, therefore, is less a lament for the future and more a hopeful return to the basis of freedom and prosperity.

The book’s chapters are historical but not chronological.  Rather, Lady Thatcher provides an astute analysis of the following and more:

Each chapter offers a wise discernment on current global trends and strategies to counter them.

Like others of her generation, Lady Thatcher’s attitudes were shaped by events during and following  World War II.  She writes that she went into politics  “with a strong, indeed passionate commitment to upholding the rights of individuals in the face of the  state Leviathan” (248).  Thus the mark of her political approach during the 1980s was a principled and consistent (neé discerning) opposition to the manifold intrusions of government on individual liberties.

When she defines what human rights mean and do not mean, her analysis is less pluralism and inclusiveness, what she calls the preening of the New Left, and more the first principles encountered in the founding documents of Britain and the United States.

Her point is thus especially prescient when the concept of common law legal framework  develops into “an institutional context and the fruit of a living tradition” (253).  It’s against this discerning framework that her statecraft is opposed to the ambitions of the emerging European Union, a United States of Europe.

There’s little doubt, she’s willing to argue, that the national identity of Europe should be preserved;  on the other hand, Britain’s long history of constitutional development frequently leaves Britain at odds with other European countries.  Still, there are aspects by which it is right for Britain to join the European Union.  But entry into a common market is ultimately not a simple matter of economics but rather an unacceptable “loss of sovereignty” (368).

Lady Thatcher is not writing hyperbole when she argues that a citizen of a sovereign nation likely could not be guaranteed a fair trial when that sovereign nation’s constitution is subordinated.  Statecraft requires careful consideration especially when a sovereign nation’s laws are supplanted by the “dubious science of customary international law” (273).

In Statecraft, Thatcher synthesizes her decades of political and international experience with a conservative theory of political sovereignty, the continuity of living legal traditions, and the defense of classically liberal individual rights.

For conservatives on either side of the Atlantic, it should be an essential book.