Conservative Book Club » Editor's Picks » Takedown: From Communists to Progressives, How the Left Has Sabotaged Family and Marriage

Takedown: From Communists to Progressives, How the Left Has Sabotaged Family and Marriage 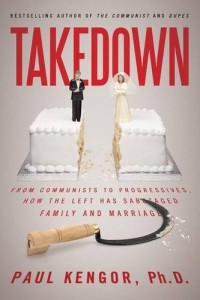 Contrary to what the mainstream media portrays, the prospect of gay marriage has actually caused a lot of contention in conservative circles. Some believe it to be quite harmless or even a sign that family values are returning to the popular fold (Jonah Goldberg) and some arguing that the redefinition of marriage actually constitutes an attack on family values and an undermining of the United States as a whole.

In his latest book, Takedown, Paul Kengor advocates for the latter and posits that the issue of gay marriage is being used as a “Trojan Horse” for radical leftists to create the changes they want in the American culture. Unfortunately, as he points out, the poor Trojan Horse has no idea that it is being used and, rather, is just happy to be at the party with a bunch of celebrants.

Kengor uses research examples that range from Stalin’s Soviet Union to The Weather Underground to the current American Communist Party to bolster his argument that the destruction of family values, marriage and Christianity has always been the ultimate goal of Communism.

However, he is careful to point out that Communists of the past had never envisioned gay marriage as the means to that end and quite often Communist regimes were quite atrocious in their treatment of homosexuals. Rather these regimes and political movements attempted to break sexual barriers through easy divorce, abortion on demand and orgiastic love-ins that were believed to be a form of political subversion. Kengor identifies the thinkers and institutions that pushed this free love agenda with particular attention paid to James Dewey (the architect of the modern public education system), the Frankfurt School of philosophy/psychology, and President Obama’s alma mater, Columbia University.

Kengor does an excellent job tracing the history of leftist thought and its spread to the United States. That being said, his best points and most intriguing examples are somewhat besides the point of the book itself, which does little to make an argument against gay marriage. Indeed, he states that gay marriage isn’t necessarily the point of the book, but rather that it has become a cultural movement that furthers the goals of the progressive left in its relentless march toward the breakdown of the family unit.

However, if the “Natural Law” that he invokes is, in fact, so powerful and natural, one would think that the progressive left is just swimming against a tide that never changes. Instead, they have managed to achieve many of their goals while winning a great number of political arguments.

Despite their best attempts in fighting the family unit, said unit appears to be gaining strength in today’s culture. Even with gay marriage, wedding invitations and baby notices for traditional families keep arriving in the mail.