The Crusader: Ronald Reagan and the Fall of Communism 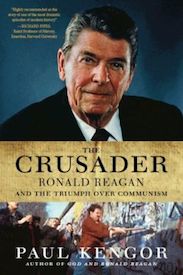 In The Crusader: Ronald Reagan and the Fall of Communism, Paul Kengor makes clear just how central the defeat of the Soviet Union was to Reagan’s personal project. Kengor, the author of biographies of Reagan and George W. Bush that focused on the two men’s religious attitudes and practices, here trains his eye on the Main Event in Reagan’s public life. His detailed account of the eight years in which Reagan managed the end of the Cold War will solidify the new consensus of historians: Reagan was a highly able man, who played a crucial role in the relatively peaceful eclipsing of the most dangerous regime in world history.

In January 1983, Reagan approved a policy document known as NSDD-75, which declared that henceforth the U.S. goal would be not merely “containing and reversing Soviet expansion” but also “promoting evolutionary change within the Soviet Union itself.” As Kengor points out, this policy was highly controversial: It was assailed by both the Western and Communist-bloc press. But Reagan was committed to it as a long- term strategy, and would not be side- tracked.

Ink has been lavishly spilled on Reagan’s skill as a rhetorician and orator; in Kengor’s volume we also see a lesser- known side of Reagan, one just as important to the eventual victory over Communism. Consider one vignette Kengor recounts, concerning the September 1983 incident in which the Soviets shot down the Korean passenger airplane KAL 007:

Though Reagan was steamed and blasted the Soviets in a statement, he reacted quite cautiously, and much more carefully than his critics would have imagined . . . He told [national security adviser William] Clark: “[L]et’s be careful not to overreact to this. We have too much going on with the Soviets in arms control. We must not derail our progress.” “Bill,” he said, “we’ve got to protect against overreaction.”

This is almost a textbook example of prudence: knowing not just what to do but when to do it, and making all judgments with a view toward the endgame. Anyone who is tempted to confuse prudence with halfheartedness would do well to study the singlemindedness with which Reagan followed his multi-track anti-Communist strategy.

Kengor includes as an appendix a KGB document alleging that, in 1983, Massachusetts senator Edward Kennedy approached Soviet general secretary Yuri Andropov through intermediaries to try to undercut Reagan. If true, the document’s allegations prove that Kennedy didn’t understand that Reagan had the right idea on how to end the Cold War and promote world peace. Nor would Kennedy have been alone: Reagan’s liber- al and conservative critics alike viewed him, for different reasons, as a dangerously simplistic foreign-policy thinker. (Kennedy himself admitted after Reagan’s death in 2004 that Reagan “will be honored as the president who won the Cold War.”) Kengor’s book tells the story of how, step by step, Reagan’s strategy worked.

Book Review from The National Review, by Michael Potemra

Tags: Paul Kengor, The Crusader: Ronald Reagan and the Fall of Communism