Let Us Talk of Many Things: The Collected Speeches 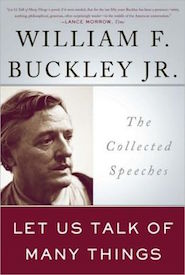 Conservative titan William F. Buckley was more than just a political pundit.  He was a spokesman for civilized values, a relentless reasoner, a verbal craftsman of subtlety and elegance, and a man who exemplified the well-lived life—not least in the relationships he cultivated with friend and foe alike.  A number of anthologies of Buckley’s columns and essays have appeared over the years, but Let Us Talk of Many Things is unique in presenting Buckley’s speeches.

Buckley was a prolific public speaker for more than forty years, and his orations often show the human personality and warmth behind the impressive intellect.  The speeches are arranged by decade, from the 1950s to the 1990s, and are preceded by short introductions written by Buckley himself setting the scene and explaining the background and circumstances.  The occasions include college commencements, anniversary dinners and banquets, debates, and conferences of various organizations both political and otherwise. This includes memorial services: Buckley’s gifts as a eulogist were second-to-none, and his heartfelt tributes to various men and women he knew testify to his deep human sympathy.

The speeches add up to a portrait of the classic Buckley: enemy of statism and collectivism, booster of the individual and his rights, defender of those crushed by communism, and protector of the religious impulse and its role in society.  Given his strong Catholic faith, it comes as no surprise that Buckley was often at his most eloquent and lyrical when speaking under Catholic auspices.  For example, there is his penetrating analysis, given at Mount St. Mary’s College in 1983, of “Moral Distinctions and Modern Warfare” with a profound inquiry into ultimate values.

Then there are pieces which reveal a keen understanding of law and the Constitution, such as the 1970 speech on “The Republic’s Duty to Repress,” given in the wake of violent civil rights activism.  The following year Buckley visited the Soviet Union and then told about the “great sadness” he found there in a lecture at Tulane University, “The World that Lenin Shaped.” And there are many more treasures among the more than ninety pieces collected here, which vary from brief salutations to extensive discourses.

Buckley’s career spanned the entire second half of the twentieth century and the slice of political history documented here is staggering, from Joe McCarthy to the Clinton/Lewinsky scandal.  Yet Buckley’s writing transcends the political controversies of the moment to provide us with a timeless education in the English language.  Cutting remarks and pithy bon mots are everywhere.

The Bill of Rights is “a list of things that the government cannot do to the people.” President Kennedy’s rhetorical style “put Madison Avenue to work making nonaction act.” “To go from peacefulness to pacifism,” Buckley says to Cold War appeasers, “is like going from thrift to miserliness.” And lest anyone think the state is the solution to the problems of mankind: “It takes government to translate individual vices into universal afflictions.”

Interestingly, the spoken medium did not curb Buckley’s penchant for sesquipedalian vocabulary, which from time to time sent his readers diving for the dictionary (some examples: asymptotic, tergiversation, and pulchritude).  In a time when the use of the English language is in fast decline—like our civilization in general—reading Buckley is a pure balm.  Conservatives will cherish this volume, as will anyone who appreciates sparkling writing and clear thinking.

Tags: Let Us Talk of Many Things: The Collected Speeches, William F. Buckley