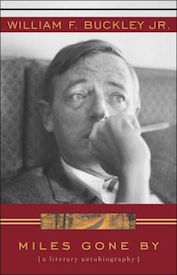 As the founder of National Review, host of the Emmy Award-winning Firing Line, bestselling author (beginning with the seminal “God and Man at Yale”), syndicated columnist, linguist, raconteur, and sometime seafaring adventurer, William F. Buckley, Jr. was not so much a giant of conservatism as a force of nature. In “Miles Gone By,” he delivered what everyone had been clamoring for — but, characteristically, with a surprising twist.

“I will not write, ever, a formal autobiography,” declares Buckley in his Introduction. Instead, he weaves together his most personal writings from the past half-century — “scenes and essays in which I figure directly” — into a kind of narrative survey of his life, at work and play. “There are personal experiences, challenges and sorties, professional inquiries, and memories beginning in childhood. Everything in this book puts me in play, sometimes actively, sometimes in a passive way, but always there.”

Along the way, you’ll be treated to Buckley’s romance with wine, his love of the right word, his intoxication with music, and his joy in skiing and travel. You’ll get his light-hearted advice on how to deal with bores and how to find refuge in a private club. You’ll also meet Buckley’s friends: Ronald Reagan, “zestfully concerned for the company of others”; Henry Kissinger “amusing, curious, ever-so-lightly irreverent”; Clare Boothe Luce, “a renowned beauty and man of affairs (a feminist, she stoutly resisted the stylistic effronteries of she-speech)”; Tom Wolfe, with “a trace of a Virginia accent, and of course there is the renowned diffidence, the matador taking tea with his mother”; John Kenneth Galbraith, who “consistently writes pleasant tributes to my own books, inevitably advising the reader that my political opinions should be ignored, my fiction or accounts of life at sea appreciated”; David Niven, of whom “my wife suspected that his magic was to induce a whim, so that he could gratify it”; and many others.

“A book of charm and grace and wit . . . agree or disagree with the conservative creed he helped shape and promulgate, Buckley is the happiest of warriors, an exuberant man of the right . . . Lord knows Bill Buckley — like all of us — can be wrong, but he has fought the battle of ideas with grace for more than half a century and is an emblem of a time when the life of the mind and the life of the nation seemed intertwined. To frustrated liberals or disappointed conservatives, the world can seem a gloomy place. ‘But,’ Buckley writes, ‘all is not lost; all is never lost’ — a warm benediction from a man who has long found joy in the journey.” — New York Times book review

Life at Great Elm, where summer seemed gloriously endless * Learning about music, as a boy * Going off to school in England, 1938 * A word about my father, William Frank Buckley, 1881-1958 * And about my mother, Alo?se Steiner Buckley, 1895-1985 * God and Man at Yale: A controversy revisited * Army Life: At Officer Candidate School in Fort Benning, Georgia * Ten Friends: On crossing paths with David Niven, Ronald Reagan, Henry Kissinger, Clare Boothe Luce, Tom Wolfe, Vladimir Horowitz, Roger Moore, Alistair Cooke, Grace Kelly, and John Kenneth Galbraith * Five Colleagues: On working as colleagues with editors Willi Schlamm, Willmoore Kendall, Frank Meyer, James Burnham, and Priscilla Buckley . . . * And a Sixth: William A. Rusher, publisher * Remembering: Whittaker Chambers, 1901-1961; Murray Kempton, 1917-1997; Henry Regnery, 1912-1996; National Review, b. 1955; Blackford Oakes, b. 1975; William Shawn, 1907-1992; Firing Line, 1966-1999 * The Conflict over the Unusual Word * On Writing Speedily * The Life of the Public Speaker: Fifty years on the lecture circuit * Going Down to the Titanic: A nine-hour dive, round trip * My Own Secret Right-Wing Conspiracy * Running for Mayor of New York City, Sort of * The Threatened Privacy of Private Clubs * We Must Sail across the Ocean! The resolve that led to a passage * Christmastime in the Caribbean: A folksy cruise, aboard my schooner, Cyrano * Gulf Stream Musings: A navigator’s thoughts, preoccupations, alarums * Pleasure on Skis: The prospect of a single run down the Vidamanette in Rougemont, Switzerland * A Sail across the Pacific: From Honolulu to New Guinea, an account written for Life Magazine * Definitive Vacations * A Pilgrimage to Lourdes * A Performance with the Symphony, Coming Up * Thoughts on a Final Passage