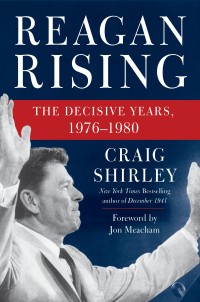 There are more than 1,000 books about Ronald Reagan, many of which clearly don’t pass muster. Leading Reagan biographer Craig Shirley has just written his fourth book on our 40th President — Reagan Rising: The Decisive Years, 1976-1980. And, like all of his other works on Reagan, Reagan Rising deserves to be read, recommended and remembered by any and all conservatives.

After three previous books, covering the 1976 primary, the 1980 election and Reagan’s last years, the question could be asked: what was there left to cover?

The answer came to Craig Shirley while researching and writing Rendezvous with Destiny, his book on Reagan’s victory in the 1980 election. What happened to Reagan between 1976 when he lost the nomination, he asked himself, and 1980 when he won his party’s presidential nomination and then the presidency?  How did Reagan gain so much momentum that carried him from failing to winning?  Was his 1980 victory just a matter of being the right candidate at the right time and having the inept Jimmy Carter as an opponent?  Or did the experience of his wilderness years from 1976 to 1980 prepare him—as they did Winston Churchill prior to World War II– for his third and successful try for the presidency?

Dismissed by many analysts as too old (he would be 69 in 1980) and too conservative (supply side economics was derided as “voodoo” economics), Reagan honed his conservative philosophy through extensive reading, writing, and speaking. He did his own research for his daily radio commentary and was a featured speaker at influential conservative meetings like the annual Conservative Political Action Conference (CPAC).

Far from relaxing during the wilderness years, Reagan moved through long days of speechmaking “with the bounce of man in his prime,” wrote columnist Donald Lambro. He seemed to thrive on work, composing his radio commentaries, drafting his newspaper columns, sketching out his talks, explaining, “I wasn’t built for a rocking chair.”

The last third of Reagan Rising is devoted to the candidate’s up-and-down campaign to obtain his party’s 1980 presidential nomination. At first he enjoyed a wide lead over the other candidates, including George H.W. Bush. He dutifully followed campaign manager John Sears’ “Rose Garden” strategy that deliberately kept him off the campaign trail. One skeptic remarked: “A Rose Garden campaign only works when you have a Rose Garden.” Bush’s upset Iowa victory generated impressive momentum for the Establishment’s favorite and stunned Reagan, who had been reassured by Sears they were on a winning track. Reagan Rising ends on a dramatic note with the crucial New Hampshire primary.

According to Craig Shirley, there are many reasons why Reagan won New Hampshire, where Bush, a native New Englander, appeared to have the edge. The most famous is the Nashua High School debate in the closing days of the primary when the moderator tried to prevent Reagan from speaking and Reagan literally roared, “I am paying for this microphone, Mr. Green!” In that moment, writes Shirley, “Ronald Reagan regained his front-runner status with thundering applause.” Even more important was Reagan’s realization that if he was going to win New Hampshire he would have to do it on the ground. No more “above the fray” strategy, he told Sears, and set about campaigning almost uninterrupted for 21 days, “a display of stamina that quieted concerns about his age.”

Reagan went on to easily win most of the remaining primaries and to be nominated overwhelmingly at the national Republican convention in Detroit. The assembled delegates sat hushed as Ronald Reagan delivered his acceptance speech, declaring that America had a “rendezvous with destiny” and suggesting that “we begin our crusade joined together in a moment of silent prayer.” “The age of Reagan,” Shirley writes, “was just beginning to dawn over America and the world.” It is a fitting end for a finely detailed book written for political mavens and the library of every major university in America.

In Reagan Rising, Craig Shirley shows how Reagan matured as a presidential candidate, applying the lessons of 1976 to 1980.  He describes how Reagan took charge of a floundering campaign and went to the people night and day, not for personal political power but to provide leadership for a nation uncertain of itself and its future. It is a great American story about a citizen politician once dismissed as “just an actor” who became one of the most consequential presidents in history.  Shirley tells it very well.

Original CBC review by Lee Edwards. Lee Edwards wrote the first political biography of Ronald Reagan and has authored more than 25 books about leading conservative individuals and institutions. He is the Distinguished Fellow in Conservative Thought at The Heritage Foundation.