Rendezvous with Destiny: Ronald Reagan and the Campaign That Changed America 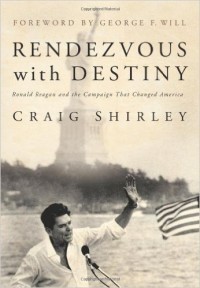 As late as Election Day, headlines across the country blared that the race was “too close to call.”

Even on the verge of his historic triumph in the 1980 presidential election, political observers continued to underestimate Ronald Wilson Reagan.

In Rendezvous with Destiny, the long-awaited follow-up to his widely praised account of Reagan’s insurgent 1976 presidential campaign, Craig Shirley tells the incredible behind-the-scenes story of Reagan’s improbable run to the White House in 1980—of how the “too close to call” election became a landslide victory over incumbent Jimmy Carter and independent candidate John Anderson.

And this, Shirley shows, was no ordinary election. It dramatically altered the course of American—and world—history. Reagan’s victory gave rise to a new generation of conservatism, ended liberalism’s half-century reign of dominance, reversed the second-worst economic crisis in American history, and led to the demise of the mighty Soviet Union.

To write Rendezvous with Destiny, Shirley gained unprecedented access to 1980 campaign files and interviewed more than 150 insiders—from Reagan’s closest advisers and family members to Jimmy Carter himself. The result is the first comprehensive history of the hard-fought 1980 campaign, a gripping account that follows Reagan’s unlikely path from his bitter defeat on the floor of the 1976 Republican convention, through his underreported “wilderness years,” through grueling primary fights in which he knocked out several Republican heavyweights, through an often-nasty general election campaign complicated by the presence of a third-party candidate (not to mention the looming shadow of Ted Kennedy), to Reagan’s astounding victory on Election Night in 1980. Shirley’s years of intensive research have enabled him to relate countless untold stories—including, at long last, the solution to one of the most enduring mysteries in politics: just how Reagan’s campaign got hold of Carter’s debate briefing books.

Rendezvous with Destiny reveals how Reagan successfully battled the headwinds of the national media, the Republican Party establishment, and even his own campaign team to become one of America’s greatest chief executives.