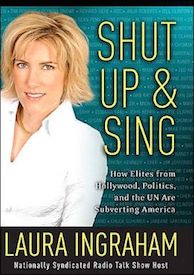 They think your SUV is evil — although theirs is absolutely necessary. They think owning a gun is criminal. They think George Bush is an idiot. They even think it’s wrong for us to do what we have to do to protect our nation and our loved ones. Worst of all, they think our abiding belief in the goodness of America and its founding principles is naive and misguided.

But in this refreshing and blisteringly insightful look at the elites, Laura Ingraham reveals that it is they, not us, who are the stupid ones — and that loudmouth liberals like Barbra Streisand would do better to just “shut up and sing.” Ingraham exposes the outrageous howlers and muddled thinking peddled as wisdom by a rogue’s gallery of Hollywood celebs, media yuppies, trial lawyers, multiculturalists, God-haters, and race-relations bullies who are exalted as heroes by the elite. Ingraham unmasks the shallowness of elite thinking everywhere it is found: in politics, the media, the ivory tower, arts and entertainment, and even business and international organizations. Nor does she restrict her skewering of the elite only to its natural home, the Democratic Party — she ably zeroes in on elite enclaves within the GOP as well.

A few of the ways that Laura Ingraham reveals the elites’ true colors: