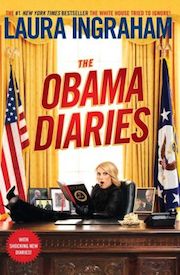 What if the personal, unedited diaries of key Obama Administration officials—and even of the President himself—made their way into the hands of one of talk radio’s most popular conservative hosts?

Laura Ingraham’s The Obama Diaries has grand fun with that notion, fusing fiction and truth into probing political commentary.

Diaries digs in right away, blasting the President for not believing in American exceptionalism.  Ingraham notes his disdain for his own country doesn’t stop there.  Like Hollywood actors who constantly demean America, Obama gravitates toward the liberal impulse to trash the country at every opportunity.

So how did he ascend to the highest office in the land?  Obama created a narrative in which his policies—and attractive nuclear family—were given rock-star status.

The Obama logo itself set the stage for the manipulations to come, revealing a campaign team “that wanted to set themselves apart as unique, iconic and, of course, historic,” she writes.

“At the heart of the Obama ascension was a well-oiled PR machine that ruthlessly controlled not only the message but also the backdrop, clothing, music, staging and every word that escaped the candidate’s lips,” she writes.

And the media played right along.

The press even fawned over Bo, the First Dog, as if he was something more than just a cute animal.  Ingraham notes that The Washington Post negotiated with the White House for exclusive access to the “First Pup,” only to be scooped by TMZ.com.

Obama promised the end of politics as usual during the campaign, but he swiftly reverted to the same old wheeling and dealing once he settled into the Oval Office.  Consider the government takeover of GM and Chrysler, deals that saw the United Auto Workers getting 55% of Chrysler and 17.5% of GM, a clear payback to the Democrat’s best pals, the labor unions.

But Obama mixed cronyism with incompetence, replacing GM’s chairman with Edward Whitacre, Jr., a man who famously said, “I don’t know anything about cars.”

The public couldn’t be snookered, though. Large groups of Republicans (72%) and Democrats (42%) opposed the auto bailouts.

Ingraham dabbles in some genuine family values mid-book, applauding the tight-knit Obama clan but blasting the First Lady for continually undercutting her spouse in public.  She emphasizes Michelle Obama’s tactics with a “diary” entry from the First Lady’s desk revealing some miscommunication on their back stories:

“We have been pounding the story of how he and I met into his head for two years now—and Barack still hasn’t learned it,” she writes.

Obama’s position on religion continues to baffle those who take spirituality seriously.  It started with his bizarre embrace of the Rev. Jeremiah Wright, a man whose hateful rants would scare most religious people out of their pews.

That’s only the beginning. Consider his moral equivalence over stem-cell research, his orders to cover up religious symbols at a Georgetown University event and speaking at Notre Dame despite his support for legal abortion as other examples of his spiritual ambivalence.

The President’s foreign policy is based on the simplistic notion that charisma power can influence the course of rogue nations.

“The hard truth is that great nations—or even small nations—don’t change their foreign policy because they had a good time chatting with our President,” she writes.  Nor do they do so based on the number of apologies a nation makes for its past transgressions, real or imagined.

“I find it simply incredible that an American President would repeat simplistic anti-American stereotype as though they were true—knowing that he would thereby give ammunition to people who hate us,” she says.

Obama’s apology tour, part of a liberal’s essential tool kit, hasn’t helped the country in tangible ways.  Instead, allies are wary of us and enemies feel free to act with more impunity than before, she argues.

Vice President Joe Biden makes a few appearances in the diary sections, at one point noting with glee that “an entire day has gone by and not a single gaffe by me.”

One of Diaries sharpest chapters involves the narcissism of a President who promised his election would heal the planet, among other supernatural feats.  Not even Jesus spoke about Himself the way Obama does.

Ingraham isn’t qualified to label Obama a narcissist, but she gives it the ol’ college try:

“If you want to identify a narcissist, find the guy who writes his memoirs before the age of 30 and you’re probably warm,” she says.

The Obama Diaries uses humor and the President’s own words to shed light on an administration that does not have the country’s best interests at heart.