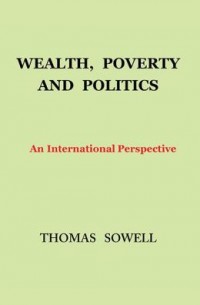 “Poverty occurs automatically. It is wealth that must be produced, and must be explained.” This quote perfectly encapsulates the message of Thomas Sowell’s newest book, Wealth, Poverty, and Politics. For far too long, the mere existence of disparate outcomes among different nations, ethnic and religious minorities, and classes has been attributed to invidious motives and actions by some supposed oppressor.

We inhabit a world with endemic inequality, and Sowell shows that the burden of proof lies on those claiming inequalities to be unique rather than a virtually inescapable fact of life. Sowell conclusively demonstrates throughout this work that inequality is a fundamental fact of life. Therefore, attempts to redress these inequalities must understand that they come from the nature of the world and not from malevolent human agency in most cases.

Geography as a Driver of Inequality

At various times, geography has been exaggerated and also underrated as a driver of human inequality, but it definitely plays a significant role in human advancement. Prior to the age of trains, automobiles, and planes, water was the single fastest and most inexpensive way to travel. Even today, water transportation remains the most cost effective method of moving freight. Sowell shows how the fact that Europe in general and Western Europe in particular, has an abundance of navigable waterways gave them a profound advantage in their economic rise.

Africa, by contrast, has a wealth of natural resources, but a dearth of navigable waterways to transport these resources which meant that until the advent of railways, much of the natural wealth of the continent was unable to be moved to market in an efficient manner.

Even though Africa is twice the size of Europe, Europe has over twice the coastline of Africa due to a myriad of peninsulas, Islands, and inlets along with far superior natural harbors for ocean-going vessels. These differences surely do not account for all of the contrasting development of these regions, but they did give both economic and cultural advantages to one and impediments to the other.

What is the Norm: Poverty or Wealth?

Sowell gives a perfect example of the backwards reasoning behind seeing prosperity as the norm and poverty as the exception when he quoted a study which posed the question “Why is Egypt so much poorer than the US?” Sowell proceeds to explain that this question is analogous to asking “Why does Egypt have so many fewer (virtually zero) tornados compared to the US?”

The problem with both questions is that they assume that wealthy nations and tornado prone areas are the norm and, therefore, any place which lacked these events was somehow odd and in need of explanation. The US has more tornadoes than any other country on earth due to the convergence of wide, level plains along with certain meteorological conditions. The tornado is a rare phenomenon in human experience; therefore, we should ask why it occurs in the few places it does rather than why it does not occur everywhere else.

In the same way, material prosperity on the level of modern developed nations is vanishingly rare in the context of human history. To expect it to be the norm ignores millennia of experience. Instead, we must ask what positive conditions need to be present and what negative conditions need to be absent to allow a society to reach such levels of abundance in terms of human and material capital.

This is why Adam Smith wrote a book entitled An Inquiry into the Nature and Causes of the Wealth of Nations rather than a book inquiring into the causes of the poverty of nations. The latter has been the overwhelming rule, and needs no explanation. It is only in our own day, where wealth has become more common than at any time in the past, that it would even occur to us to ask the question in that way.

Towards the end of Wealth, Poverty and Politics, Sowell presents overwhelming evidence to show that the world fails to live up to our expectations of equal representation of all minorities in the ranks of the successful and the downtrodden. This failure is not merely in the direction of an overrepresentation of whites in the higher ranks of society.

Upper income brackets are far more Asian and Jewish than is the overall population. The ranks of the U.S. military have been far more Scots-Irish, Irish, Southern, and German than is the population as a whole throughout American history. The political leadership of Hawaii is far more Japanese than it should be proportionally to its population. Asian-Americans are more likely to get approval for bank loans than are whites while Jews account for 22% of Nobel Prize winners even though they are only .2% of the world’s population.

We could fill the pages of thousands of volumes with similar examples of inequality and overrepresentations that fit no possible vision of white-privilege or white-domination of people of color. Yet, those who would cultivate grievances and resentment in the pursuit of creating reliable voting blocks, garnering political favors, and cultivating moral superiority have failed to learn from such evident examples.

This book is an invaluable inoculation against the hucksters of identity politics and racial visions of success and failure. Until more people learn to take seriously Dr. Martin Luther King’s dream of a world in which we are all valued for the content of our character rather than the color of our skin, we will largely fail to redress the social and economic woes of our nation.