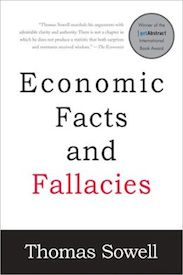 Using plain language that can be readily understood by people with no previous knowledge of economics, the renowned conservative economist Thomas Sowell in “Economic Facts and Fallacies” explains the key facts about economic issues that are all too often ignored by lazy politicians and a relentlessly Leftist media. Sowell puts the flesh of real issues on the bare bones of economic theory, explaining the economic facts behind issues including rising housing prices, the high cost of college, and numerous “income distribution” issues such as the high salaries of corporate CEOs and more.

Sowell, who has taught economics at Cornell, UCLA, Amherst and elsewhere, clearly explains all of this without resorting to incomprehensible economic terminology or the shallow liberal politicization that mars all too many expositions of economic issues. Explaining that “some things are believed because they are demonstrably true,” while other things are believed simply “because they are consistent with a widely held vision of the world — and this vision is accepted as a substitute for facts,” he doesn’t hesitate to expose some of the Left’s most cherished economic dogmas as the fallacies they are. He explodes the myth of male-female income disparities and the myth that public housing projects will reduce crime in poor neighborhoods, unlocks the secret of poverty in Third World countries, and much more.

Clear, concise, and reliably conservative, Thomas Sowell’s Economic Facts and Fallacies is a solid primer that exposes the Left’s vaunted economic theories as the castles in the sand that they really are.

“Economic Facts and Fallacies is the kind of book lesser lights would have labored for years to produce. Full of pithy and useful data, and imbued with the wisdom of a lifetime of economic analysis, this is another home run for the sage of Palo Alto.” — MONA CHAREN, syndicated columnist