Applied Economics:Thinking Beyond Stage One 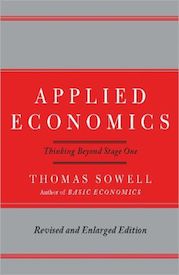 So much of our national political debate these days revolves around economic matters — taxes, health care, even affirmative action and immigration policy — that it is essential for every informed American to have a working knowledge of economics. In Applied Economics: Thinking Beyond Stage One, the renowned conservative economist Thomas Sowell has made it possible for you to grasp quickly and easily the economic elements of key public policies. Better yet, this revised and expanded edition now includes material on the roots of the Crash of 2008, the economics of immigration, and other timely topics.

With an experienced teacher’s knack for making the complex simple, Sowell explains why politicians frequently cheerlead for policies that are bad for the economy; why cities with rent controlled housing usually end up riddled with slums; why medical care costs just keep going up; and much more. He turns his keen eye also to the economics of discrimination and even examines the economic development of nations. And look out, Hillary: Sowell even explains why Socialist schemes like single-payer health care actually offer much less than meets the eye, and invariably fail. Sowell says that many disastrous public policies would never have been adopted if short-sighted politicians had been willing or able to trace the consequences of implementing them beforehand. In this book, he shows this can be done — how, in the words of the book’s subtitle, to “think beyond stage one.”

“Sowell is right to preach the superiority of competitive markets to various forms of regulation that backfire with alarming regularity.” — National Review

“Informative and entertaining. . . . Sowell gives example after example of how the foolish policies of politicians have increased the common misery rather than the common good. … If you are interested in honing your knowledge ‘to think beyond stage one,’ you will not go wrong by reading Mr. Sowell’s new book.” — Washington Times