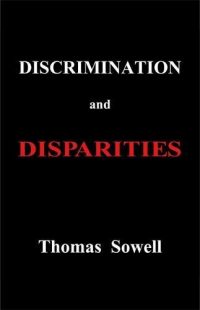 In his latest book, Discrimination and Disparities, Thomas Sowell narrows in on the leftist narrative that social discrimination causes economic disparities. Building on his other free-market economic books, Sowell deftly proves the left wrong.

Sowell clearly demonstrates, through facts and practical wisdom, that the disparities existing between and within different cultures throughout the world, and even within the United States, is not solely or even primarily the result of discrimination.  Rather, Sowell demonstrates that a host of factors are at play when contributing to the success or failure of an individual, especially one’s family structure and whether one is a first-born child.

Sowell’s fundamental premise is that so-called evil capitalists, if they are motivated by money, are not well-served by discrimination that causes them to lose money. Sowell writes:

“Morally neutral factors such as crop failures, birth order, geographic settings, technological advances, or demographic and cultural differences are among the many reasons why economic and social outcomes so often fail to fit the preconception of equal of equal or comparable results.   Yet morally neutral factors seem to attract far less attention than other causal factors which stir moral outrage, such as discrimination or exploitation.”

In fact, it is big government bureaucrats, often the least connected to the policies that they institute, that are usually the biggest causes of discrimination. Slavery’s “Black Codes” and Jim Crow laws are a primary example of government-created discrimination. Those in government are also some of the biggest contributors to disparities seen among different ethnic groups in the United States, as seen through government mandated solutions to societal issues.

For example, restrictions on housing imposed by the government in gentrifying liberal communities such as San Francisco have caused a decrease in black settlement in that city despite a large overall increase in population in San Francisco. The poorest are most negatively impacted by minimum wage laws, but make some of the biggest strides when government lets people keep their money as opposed to taking it (a policy that would also give government more revenue in the long run).  Perhaps most tellingly, LBJ’s Great Society decreased the acceleration of gains that black Americans were making out of poverty, helping contribute to the urban poverty so strongly decried by today’s leftists.

Taking a larger view of the world, the book shows that many factors affect the success of an individual and a group, not just discrimination or supposed discrimination. Discrimination and Disparities is an important book that will suit the intellectual and practical desires of readers, as well as inserting cold, hard facts into some very emotional, if not taboo, debates.