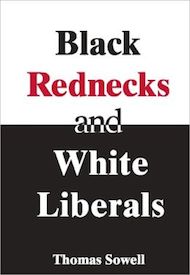 Lazy, lawless, and sexually immoral – that’s how Northern employers and cops regarded poor Southern “rednecks” as late as the 1940s and 1950s. Many Southern blacks, Thomas Sowell explains, picked up the same habits. But while both white and black Southerners have moved up in class and affluence, Sowell notes that ghettos are still filled with “black rednecks” who have never escaped these self-destructive patterns. Why not? Their attempt to escape, as Sowell demonstrates in “Black Rednecks and White Liberals,” has been consistently and repeatedly hampered by white liberals. The Left, says Sowell, has turned dysfunctional “black redneck” culture into “a sacrosanct symbol of racial identity.”

These essays bring you the most enlightening results of Sowell’s over twenty-five years of fearless and groundbreaking research on racial and cultural issues. He tackles a broad spectrum of issues, sweeping aside entrenched liberal clich?s and dogmas. He ably supports his profoundly original and arresting vision with data that liberal analysts would prefer to ignore or have failed to grasp.

In numerous ways Sowell boldly challenges the racial orthodoxy that has prevailed largely unchallenged since the 1960s among leftist academics and the media elite. He even dares to explore the real history of slavery, asking why historians have produced volume after volume about Africans enslaved by white Americans — and all of American slavery’s historical and sociological fallout, real and imagined — while virtually ignoring the fact that slavery has been ubiquitous throughout history and is still practiced by Africans in Mauritania, the Sudan and parts of Nigeria. Elsewhere he draws striking parallels between the tragedy of Jewish history and the bloody fate of Ibos in Nigeria, the Armenians in the Ottoman Empire and other “middleman minorities.”

Over the last thirty years, Thomas Sowell has established himself as one of our nation’s most brilliant and insightful conservative commentators on racial issues. Black Rednecks and White Liberals is his masterwork.